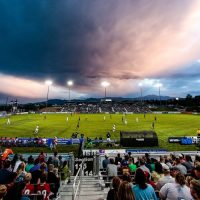 New Mexico United are finally at the end of their month-long road trip. United will face Colorado Springs Switchbacks FC for the second time in eleven days on Wednesday night. This time though, it is to try and advance in the U.S. Open Cup.

The winner of the match on Wednesday will advance, along with the other third-round winners, to face off against an MLS club. The chance to play against the top tier of U.S. soccer is a chance for each of these clubs to gain more exposure and for soccer as a whole, grow the sport.

United have had a busy month, with this being the sixth match. During this stretch, they’ve managed to go the entire month undefeated, which is no small feat.

In the first meeting between the two clubs, Kevaughn Frater ran roughshod on Switchbacks FC, netting his second hat trick of the season. The result came about even with the absence of the newly christened ‘El Matador’ Santi Moar. Now, Moar is back, and Colorado will have to find a way to handle the additional threat. United are coming in full of confidence, having secured their first winning streak of the campaign.

Head Coach and Technical Director Troy Lesesne have done an excellent job of rotating the players and allowing them to get rest as needed during this busy period. Given that United doesn’t play again until June 5th, there may not be much rotation in the match on Wednesday. United do look dangerous with a healthy roster and no players facing suspension.

For United to advance to the fourth round, they need to stick with what has worked all season. By finding space for Moar and Frater, United have the best chance to put the ball into the back of the net. The high press in Coach Lesesne’s scheme has been especially effective and creates chances for United that other clubs don’t generate.

Defensively, United will need to keep track of Shane Malcolm and Kwasi Donsu. Colorado is generally very good at putting crosses into the box. If either Malcolm or Donsu can get on the end of one, it could be trouble for United. With Justin Schmidt and Rashid Tetteh on the inside Colorado could be in for a rough night.

Devon Sandoval – Devon’s play this season has evolved, and he’s really developing in a setup role. His hold up play and the pressure he puts on defenses is going to open lanes for Frater and Moar.

Ethen Sampson – Probably the club’s most reliable defender since he stepped onto the pitch, Ethen more than dealt with Colorado’s attack in the first match and more of the same should be expected.

Much like in the first meeting, Switchbacks FC will have their hands full. Even more so with the return of Moar. Their recent results don’t inspire much confidence, but that doesn’t mean they can be counted out. In their last five matches, they have a record of 1-4-0 and have conceded nine goals while only scoring two.

There is a bright spot for Switchbacks FC. They looked much improved in their last match, dominating possession over Oklahoma City. If not for a missed penalty, they could have come away with a result.

Colorado is going to try and cross the ball into the box. That’s the key to their offense. With players like Donsu waiting, left unmarked they could be dangerous. Against United, they will need to force the issue and go against their season average of fewer than one goal per match.

In league play, Switchbacks FC are conceding nearly two goals per match, a number that works in United’s favor. In order for them to have a chance, they are going to have to press, something they don’t do well and get United out of their rhythm. United may have too many weapons for Colorado to deal with effectively.

Colorado has nothing to lose in the Cup match this week and could cause United some issues if they aren’t careful.

Shane Malcolm – Malcolm was a player to watch in the last matchup, and while he didn’t get on the sheet he made life difficult for United at times. He is a mismatch waiting to happen.

Mike Seth – Seth was the goal scorer for Colorado the first time these two clubs met. He was able to create a goal from a tough set piece situation and could be dangerous in this match.

The match will be streamed live on ESPN+ beginning at 7:00 p.m. (Mountain) on Wednesday, May 29. International viewers will be able to watch the match live on YouTube. ESPN+ is viewable online via the ESPN app or across a variety of mobile and connected living room devices, including Amazon’s Fire TV, Apple TV, Chromecast, Roku and more. The match will also be broadcast live on ESPN Radio 101.7 The Team and can be streamed on www.1017theteam.com and the TEAM App.