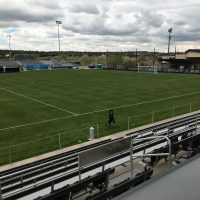 New Mexico United have earned the right to face off against an MLS club in the fourth round of the U.S. Open Cup.

Last night United capped off a five-match road trip against Colorado Springs Switchbacks FC. Unlike last time, this match was part of the U.S. Open Cup third round. Colorado Springs certainly didn’t make it easy for United, showing a lot more resolve than in the first meeting between the clubs.

The United team sheet featured six changes from the previous match against Austin Bold. As experienced as each of the starters is, they weren’t entirely on the same page for the first half. After two first minute opportunities that were wasted, both clubs settled in for an even first half. The clubs would remain even on possession, and neither would put any real threat on the others keepers.

United struggled to finish, and Colorado Springs couldn’t connect on their crosses. Looking back at the match preview, these were areas that the clubs needed to have success in order to have a chance to win.

After the half, Colorado Springs came out with a new game plan. With a high press that United hadn’t seen in the first half, or in the first meeting, it paid dividends for the hosts within minutes. Jordan Burt would find a yard of space in the 52nd and place a left-footed shot past a diving Cody Mizell to put Switchbacks on top. On the play, United was not able to close down on Burt in time to prevent the shot.

Coach Troy Lesesne would make his first two substitutions over the next few minutes, bringing on Devon Sandoval and Juan Guzman. Sandoval coming on would give United more in the attack, while Guzman would come in to help solidify the midfield and the link up play. These two players, along with the later introduction of Daniel Bruce, would provide United with the spark they needed.

With both Kevaughn Frater and Sandoval up top, Switchbacks keeper Abraham Rodriguez would face a tough task. In the 72nd, both United strikers would put shots on target that forced Rodriguez to react. Although he made the saves, the sequence brought United roaring back to life.

Frater would find a chance to link up with Chris Wehan in the 87th, and the visitors pulled back level. Taking a pass from Santi Moar, Frater would flick it on towards Wehan, who would place a left-footed shot into the back right corner. Rodriguez failed to guess the right direction in this instance, and the match would go to extra time.

Two minutes in, Daniel Bruce would make a run into the left side of the box and would go down on a foul. The referee signaled for a penalty for United and Switchbacks captain Rony Argueta would take exception to the call. Argueta would bump and knock down the referee, earning himself a red card and permanently changing the composition of the match. Frater, the USL leading scorer, would convert the penalty putting United ahead 2-1.

Having the one-man advantage, United would see out the match putting together an impressive 67% possession rate and 22 shots for the match. United is not typically a high shot volume club, opting more for high percentage shots. No matter what has been thrown at them so far this year, Lesesne has had the answers, and they look to continue to build momentum going forward.

Kevaughn Frater – the club as a whole fought back from a deficit, but with a goal and an assist, Kevaughn was instrumental in United getting the win.

The fourth round draw took place earlier this morning, and United was placed in a group with Colorado Rapids, Minnesota United and Sporting Kansas City. The group covers the largest geographical area of the eight groupings that were announced. United will face off against Colorado Rapids in the fourth round.

United finally return home after a five-match road trip. New Mexico will be back at The Lab on Wednesday, June 5th as they take on Oklahoma City Energy FC. The match will be a special night for the club as they host their first ever Pride night.