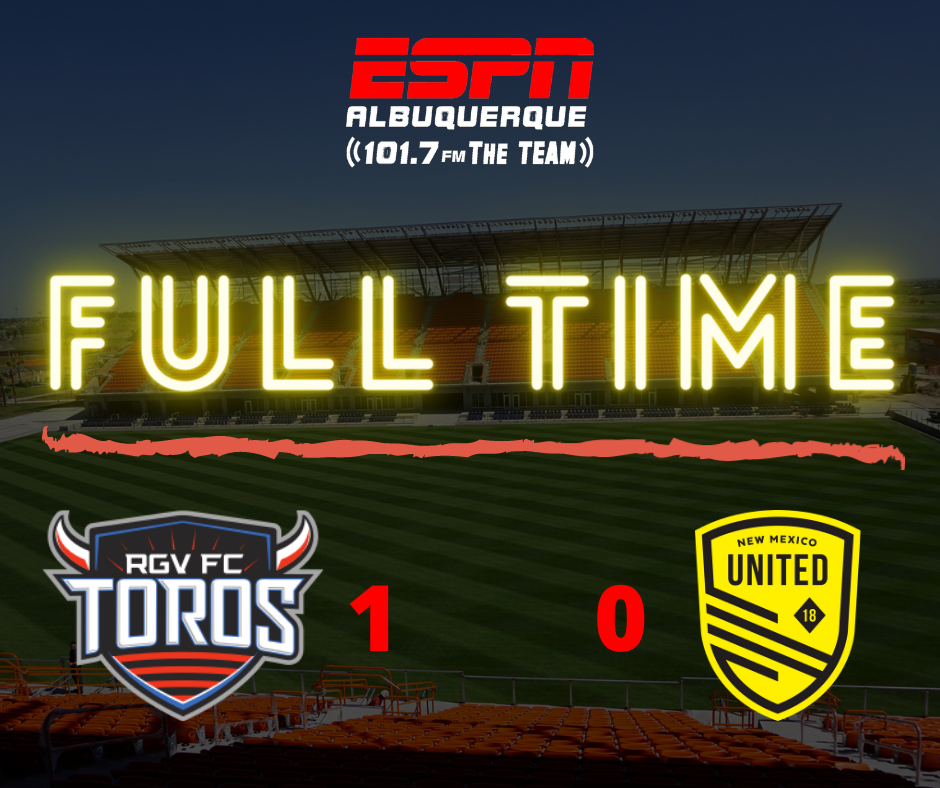 For all the excitement heading into the first competitive match of the 2021 season, it got off to an extremely slow start. The opening ten minutes featured little more than the referee’s whistle constantly stopping play.

Rio Grande Valley handled the disruptions in play better and was the first side to show some teeth in the final third. Their early chances didn’t amount to much, though, as New Mexico United was able to handle the pressure. The defending from United prevented the Toros from being credited with a single shot until the 35th minute when their first was well off target.

New Mexico had a tremendous opportunity to open the scoring in the 36th when both Amando Moreno and Devon Sandoval were able to get in behind the Toros defenders. Moreno found himself on the receiving end of a through ball that put him in a one-on-one with the RGV keeper, Tyler Deric. Deric came flying off his line and prevented Moreno from doing any damage by going to ground and blocking the shot.

In the 41st the new United keeper, Alex Tambakis, was called into action when Christian Sorto took a shot from the edge of the 18-yard box. Sorto’s shot was deflected by Kalen Ryden, sending it in a completely different direction from the original trajectory. Tambakis reacted quickly and was able to keep the deflected ball out of the net.

After the first half ended goalless, Head Coach Troy Lesesne made a surprise move subbing on Sergio Rivas for Michael Azira. The decision was one to potentially help kickstart United’s attack once play resumed. Within minutes United generated two chances but wasn’t able to convert either of them.

The Toros played themselves back into the match around the hour mark and gave themselves a number of opportunities that United was somehow able to rebuff. Their luck ran out in the 65th, however. Elvis Amoh put in a shot from around the top of the box that took a deflection off of Ryden once again. This time, the deflection caused the ball to loop high into the air and caught Tambakis in a position where he was unable to make a play. The ball found its way into the far corner, putting the hosts in the lead.

RGV nearly doubled their lead minutes later after Rivas conceded a foul twenty-five yards away from the goal. On the ensuing free kick, Tambakis managed to make a leaping save and pushed the ball over the bar.

In the 86th, Brain Brown had an opportunity to equalize for United after being played in by Daniel Bruce. Brown played the ball back towards the middle of the field, allowing him to get in behind the Toros defense. With only the keeper to beat, Brown took an off-balance shot with his left that went wide of the goal.

That would prove to be the last good attempt for United as they were unable to create any additional chances. The Toros were able to run down the majority of the remaining time and came away with the 1-0 win.

Rodrigo Lopez – The Toros midfielder was a dynamo the entire match. With an 84.3% passing accuracy, two chances created, along with one tackle and one interception, he was a handful for United.

New Mexico will look to rebound after the loss in their next match. The next challenge for the club is El Paso Locomotive FC. That match will take place on May 8th at Southwest University Park.