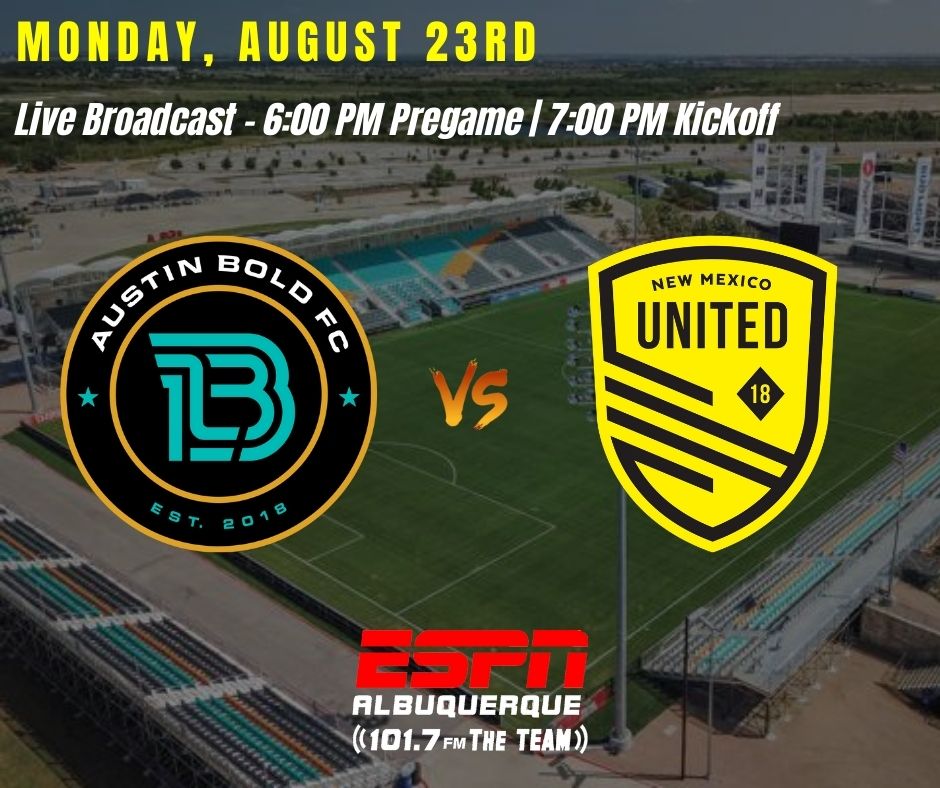 In the midst of a five-match winless streak, it might seem like things are starting to look bleak for New Mexico United. Fortunately for the club, their sixth-place position isn’t as precarious as it seems. Only five points separate second from sixth place, and all of the clubs that hold onto those spots know how important the final two months of the season are.

For Austin Bold FC, their grasp on the final playoff position is tenuous at best. They sit one point ahead of both San Antonio FC and United while holding a negative goal differential. A loss to United on Monday night could see them slip to fifth. While their results have been better of late, their results against United aren’t encouraging. They’ve faced each other twice this season, with United winning the first, 3-1, and both sides taking a point after a goalless draw in the second.

Scoring hasn’t been the strong point of Bold’s season, but defensively they have shone. Through 16 appearances, Elliot Pannico is tied for the league lead in clean sheets with seven. The players in front of him have also contributed significantly to that effort. The defensive unit for Austin has only allowed 44 shots on target, resulting in 31 saves and 19 total goals conceded. The play of Austin in the defensive third will likely be the deciding factor.

Gustavo Rissi – Rissi has been instrumental in helping to secure Bold’s defensive third. Near the top of each of the defensive categories for the club, Rissi’s performance this season has been impressive. Look for him to have an impact on Monday night.

United knows that although they are still in the thick of the playoff race, something has to change for the Black & Yellow. A club with this many capable goalscorers hasn’t lived up to the expected threat they represent. They’re averaging a goal once every 101 minutes (Not including the goals from Chris Wehan, which were scored when he was with Orange County), which leaves them near the bottom of the league in goals scored. Fortunately for United, they are also near the bottom of the league in goals conceded, due in large part to the form of Alex Tambakis.

While the number of shots taken by United also leaves them in the bottom half of the league, what’s more concerning is the conversion rate. They’ve taken 206 shots on the season and only converted 13.3% of those into goals. Troy Lesesne has talked about the number of shots that the club is taking and is convinced that they’re on the upswing. Though there’s reason to believe that, there have been instances where they haven’t been able to finish when they likely should have. Against a solid defensive club, United will have to make the most of the chances they can get.

Amando Moreno – Moren is due. He’s had opportunities in recent matches since his return to the club but hasn’t been able to capitalize on them. On and off the ball, his work rate is something to watch, but he can get himself into jams when he keeps his head down. If he can begin to link up with Wehan, there’s a high probability he will get onto the scoresheet.

Monday night’s match with Bold is scheduled to kickoff at 7:00 p.m. (MT) from Austin. The match will be streamed live on ESPN+. Locally, supporters can listen to the match live on ESPN Radio 101.7 The TEAM, via The TEAM app, and website.