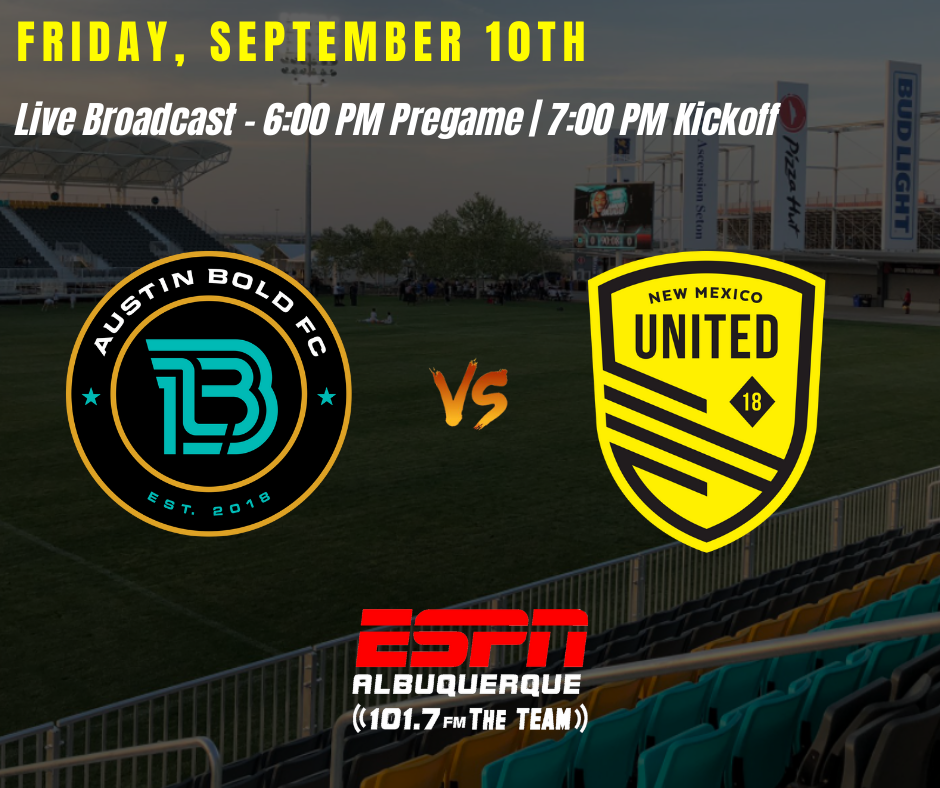 After what seemed like an eternity, New Mexico United finally broke a seven-match winless streak with an impressive 3-2 win over Colorado Springs Switchbacks FC. They were able to shut down Golden Boot leader Hadji Barry and showed signs that the club still had some fight in them.

The win against the Switchbacks kept United in the race for the playoffs and set up a showdown with Austin Bold FC on Friday night that could have major playoff implications. Austin currently sits one spot ahead of United and holds a one-point lead in the table over United. Much like United, the Bold have been struggling lately and snapped a winless streak of their own. Over the past two weeks, they’ve made several roster moves and have hired a new manager.

As soon as Ryan Thompson took the reins, he immediately made changes to the team sheet, and those moves paid off. Bold played a more direct, attacking style of play against San Antonio FC and picked up an important three points. With their season appearing to be slipping away, they still have work to do, and moving away from a defensive mindset could be just what they need.

Collin Fernandez – Despite their struggles this year, Fernandez has been consistent in his effort on the pitch. Fernandez is someone that can be a tough beat in the defensive third. United will have to find ways to either play through the opposite side or get him off balance to improve their chances for a win.

United seems to have finally found the spark that they needed in the win against Colorado. They overcame early adversity after an own goal and found a way to win. There’s confidence brewing, and the play on the pitch finally seems to match the words that have been said by Troy Lesesne and the players. The resurgence of Chris Wehan has been an important part of the turnaround. Since his return, he has scored twice and provided an immeasurable amount of energy and creativity in the attack.

With the attack getting back on track, the defense got a boost as well since Kalen Ryden returned from an injury. After missing more than a month, Ryden steps back into the starting centreback role and helps to solidify the back line once again. Against a club like Austin, a strong defense will provide United with a good chance to pick up three more points on the road.

Sergio Rivas – Last week, Rivas dropped into more of a defensive midfield role, and there was such a difference in how the match played out, it was night and day. Rivas put together a stellar defensive effort, and playing from the deeper position allowed him to make runs at the Switchbacks defenders. In doing that, Rivas picked up an assist and a hockey assist while helping United pick up the win.

Friday night’s match is set to kickoff from Bold Stadium at 7:00 p.m. (MT). The match will be streamed live on ESPN+. Locally the match can be heard on ESPN Radio 101.7 The TEAM, via The TEAM app, and The TEAM website.