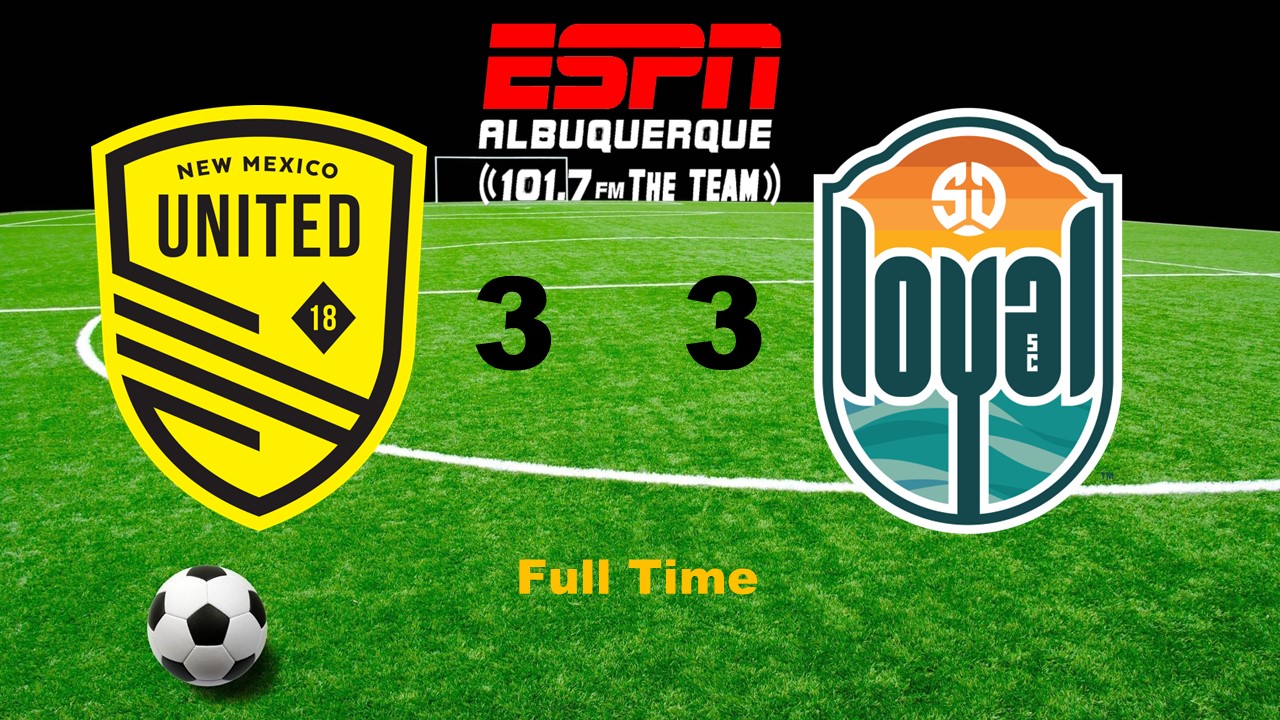 United’s quest for the post-season stayed alive after picking up a point in a 3-3 draw with San Diego Loyal on Sunday afternoon. In a match that meant nothing for Loyal, but everything for United the action wasn’t in short supply.

Amando Moreno was easily the man of the night for United and he got involved from the opening whistle. Inside the first minute, Moreno found himself charging into the box to play a deflection from the Loyal keeper. Instead of finding the rebound, Moreno found the deck after being fouled in the area. The early penalty decision gave United a chance to make an early statement. Justin Portillo, the designated taker, stood over the ball and calmly slotted home to take the lead.

Loyal would get their own chance from the spot in the 24th. Sam Hamilton stuck out his leg to try and take the ball off of Thomas Amang, but instead caught the leg of the forward, sending him tumbling. Loyal would give the honor of taking the kick to Charlie Adams. Adams would go to the bottom right corner with his attempt. Alex Tambakis would guess the right way, but the shot had too much power on it for the Greek to stop it.

Level at one goal each, Loyal tried to push the issue with United. Minutes later they would get a great opportunity to take the lead. Taking advantage of a chance to go on a counter, the ball was played forward to Amang. Crossing the ball from short range, Amang forced Tambakis to try and make a play on the ball. Alex was able to punch the ball away from goal. Unfortunately, the ball went directly to Alejandro Guido, who was able to head home to put Loyal ahead, 2-1.

Moments before the first half ended, United would put together a well-worked goal to square the score line. Will Seymore would make a big switch with a cross into the area. With the ball soaring over everyone, the only person able to get to it was Harry Swartz. Swartz headed the ball back to the center of the area where Moreno was waiting. The El Salvadoran pounced on his opportunity and after a touch drove the ball into the back of the net to send the match into halftime 2-2.

Moreno would strike again less than two minutes into the second half. Finding himself in space, he took the ball deep into the attacking half. As he neared the box, he put the ball onto his right foot and lashed it toward the goal. From nineteen yards out, Moreno buried the ball into the top left corner to give United the lead once again.

Coming into the match, United had a record of 1-0-0 when scoring three goals or more. Loyal isn’t the kind of club to sit back and let things happen. They weren’t satisfied dropping points at home to an opponent, so they found another opportunity in the 52nd. With a free kick that started on the left wing, the ball was driven in for Adams. Adams was free enough to get a head to the ball, but his shot went off the post. Amang was there though and collected the rebound before finding the net again to pull level once again, 3-3.

Amando Moreno – Moreno was electric on the pitch at Torero Stadium. At the place where he tore his ACL almost exactly one year ago, he was dominant. He looked confident on the ball and was making players miss. He showed a level of creativity that had been missing from the United team sheet for weeks and it paid off.

United faces their second of three matches this week when they return to The Lab to take on LA Galaxy 2 in the rescheduled match from last week. After picking up a point against San Diego, United’s magic number is now four. A win will all but secure a spot for the Black & Yellow. Anything less and the match against Colorado Springs at the weekend essentially becomes a win-or-go-home affair. Wednesday night’s match against LA Galaxy is set to kickoff at 7:00 p.m. (MST).