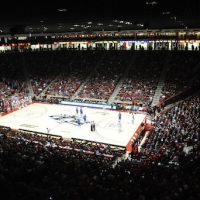 The University of New Mexico Lobos used a balanced, team effort to defeat the Evansville Purple Aces 78-59 at DreamStyle Arena on Wednesday Night.

Leading scorer on the year Chris McNeal added 13 points on 5 of 8 shooting from the field, while freshman Makauch Maluach posted his first double-digit game of the season with 10 points and three rebounds.

The Lobos jumped out to an early 3-0 lead on a three-point basket by Troy Simons on the opening possession of the game, the first of four three-pointers made by Simons on the night. UNM would end the half with an eight-point lead after out-shooting the Purple Aces 40% to 33% in the first period.

UNM would finish shooting just under 50% from the floor as a team and 40.7% from behind the arc. The Purple Aces owned a significant 18-7 advantage in free throws, but they struggled from the field on just 36% shooting, while making just three of 13 attempts from downtown.

Turnover margin proved to be an essential factor in this game as the Lobos’ high-octane pressure defense forced 21 turnovers from Evansville. UNM scored 20 points off those turnovers, including 20 fast break points compared to just two for the Purple Aces.

Although he managed just two points on 0-4 shooting from the floor, Antino Jackson posted ten assists for the Lobos. An impressive feat considering he single-handedly beat the entire Evansville roster in assists 10-8.

With the win, the Lobos move to 3-4 on the year and will look to build upon the victory against the UTEP Miners in El Paso on Saturday Night.