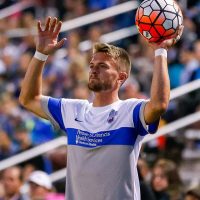 New Mexico United (4-1-6) could do with some time off, but there’s no rest for the weary.

It won’t be until after they face Colorado Springs Switchbacks FC (2-6-2) that they will have a week between matches. Having three matches in eight days is sure to take its toll on any club. Although they are surely ready for a break, United know that they cannot overlook this weekend. Coming off two draws in a row they have a chance to get some real momentum going and get some breathing room atop the table. And if United needed any more motivation, this installment of the Four Corners Cup could have United sitting on seven points and comfortably ahead of the pack for the time being.

New Mexico advanced to the third round of the Open Cup on Wednesday night. In dramatic fashion, United was able to outduel Phoenix Rising in penalty kicks after 120 minutes of open play. Even with a team sheet that had several changes in an effort to rotate the squad, having to play that long will still take a toll. Coupled with the travel and lack of time off, this may well be a trap match for United. Coach and Technical Director will no doubt have his club prepared and as rested as possible.

United will be without the services of Santi Moar for this match after being shown a red card against El Paso. With Santi unavailable and Chris Wehan playing a lot of minutes on Wednesday, we may see Daniel Bruce get a spot start. In what is a tired side, the inclusion of Bruce could be a spark for the club.

This could also be a chance for the defensive unit to get themselves another clean sheet. We saw a tremendous display from Ethen Sampson in his debut, and he could be in for another solid performance. It will most likely fall to Ethen or Josh Suggs to keep an eye on Shane Malcolm. Malcolm, who is Colorado’s top scorer, has the ability to score when not kept in check.

Daniel Bruce – In a matchup like this, Bruce could have an impactful night. His movement and ball skills would be beneficial in the absence of Moar.

Ethen Sampson – after his performance in Phoenix, Ethen has more than earned another start. His situational awareness and pace make him extremely effective going forward and tracking back.

Colorado Springs has their work cut out for them against United. Their season to this point has been hamstrung by a lack of scoring and a high concession rate. With only nine goals scored and 17 conceded, it’s no surprise where they sit in the table.

Even with the lack of results, United can’t be complacent, or they will be punished by Malcolm. Watch for Colorado to continue to cross the ball in a concerted attempt to find Malcolm or even Jordan Burt. United doesn’t have a lot of height, so closing down will be especially important.

Shane Malcolm – the midfielder has shown more than many would have expected at this point in the season. 16 chances created and three goals speak for themselves, Malcolm is very talented.

Abraham Rodriguez – despite leading the club in conceded goals, he also leads in saves. While not the smallest player in the league, he may be susceptible if United can get him going one way before putting it in the opposite side of the net.

The match will be streamed live on ESPN+ beginning at 6:00 p.m. (Mountain) on Sunday, May 12. International viewers will be able to watch the match live on YouTube. ESPN+ is viewable online via the ESPN app or across a variety of mobile and connected living room devices, including Amazon’s Fire TV, Apple TV, Chromecast, Roku and more.