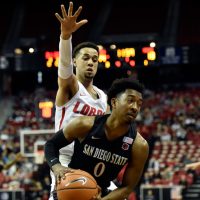 Lobo fans received some positive news earlier this season with the announcement that senior guard Anthony Mathis would be back playing at the Pit after the NCAA granted his request for a red-shirt graduate season.

Mathis joined Jim Villanucci this afternoon on ESPN Radio 101.7 The TEAM to explain his reasoning for requesting the transfer. Citing a desire to be closer to his family in Oregon, Mathis expressed his gratitude to UNM fans and head coach Paul Weir, stating that Weir supported his decision and the two remain close.

Mathis led the Lobos in scoring last season with 14.4 points per game.