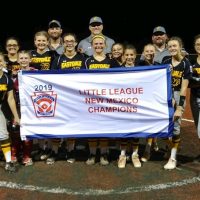 The 2019 Eastdale Major Softball All-Star team departs for Waco, Texas on Monday to represent the State of New Mexico in the Little League Softball Southwest Regional tournament after defeating Silver City Little League in the State tournament in Carlsbad on Wednesday Night.

Facing two consecutive elimination games against an undefeated Silver squad, Eastdale rallied in the bottom of the sixth inning in a scoreless semi-final game to win on a pair of doubles by Elli Breckenridge and Lili Montoya. Montoya roped a line drive over the outstretched glove of Silver’s second base girl to drive in Breckenridge for the walk-off win.

Breckenridge allowed just two hits over six innings of work to earn the victory, with six strikeouts and zero walks. She would go on to pitch all 12 innings of the double-header, allowing just three earned runs, with ten hits, 12 strikeouts, and one walk on 156 total pitches.

In the championship game, Silver jumped out to an early one-run lead on a pair of hits in the bottom of the second, including a double to the left-field gap. Riding a wave of confidence from their walk-off victory, Eastdale would respond in the top of the third frame with three runs of their own, capped by a three-run home run by Lili Montoya that scored Elli Breckenridge and left fielder Bella Swanson.

The two relentless teams would each plate a run in their respective half innings before Silver tied up the game 4-4 with a double to the gap off Breckenridge in the bottom of the fourth inning. Those two runs would be the last two allowed in the game by Eastdale’s talented pitcher.

Montoya, the offensive MVP of the tournament for Eastdale, started a two-out rally in the top of the fifth with a single to left field. Brooklynn Eardley, Eastdale’s catcher, smashed a triple over the reach of the right fielder to plate Montoya for the game-winning run. Although one of the smaller kids on the team, Eardley punished Silver for playing their outfielders in against Eastdale’s powerful cleanup hitter.

The Eastdale All-Stars would add an insurance run in the top of the sixth inning on a triple to the right-field gap by right fielder Kyla Crawford. Silver fought until the end with three ground balls and a walk in the final frame, but the sure-handed Eastdale infield of Lily Montoya, Mya Garcia, Sophia Adams, and Lily Bell converted all three opportunities into outs to seal the victory.

With tears of joy in their eyes, coaches and players stormed the field to celebrate their emotional journey that started over a year ago. Unfinished Business was the adopted team motto that fueled Eastdale through a month of practices and two-a-days in the June Albuquerque heat. Redemption was the focus after the team missed a chance to play in the State tournament in 2018.

The girls now head East to the Southwest Regionals in Waco with the goal of following in the footsteps of the 2012 Eastdale Major team that won the Little League World Series Title. They take on Oklahoma in the first round of the tourney at 10 am CT on July 24th, with coverage of the game provided by ESPN +. If you would like to support the team, they are accepting donations to help cover travel costs at the following link below.