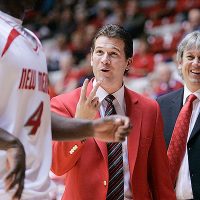 Sure, the Lobos (17-10, 6-8) didn’t let Bryce Hamilton single-handedly defeat them. It was more like they beat themselves in the final minutes. The Lobos uncharacteristically missed six foul shots within the last five minutes of the game, letting the result slip away. The loss to UNLV was the sixth in the past eight games and only the second of the season at The Pit.

With any luck, they will have a short memory since their next game is already upon them.

Tuesday night, the Lobos are home again, this time going up against the Nevada Wolfpack (16-10, 9-5) and former coaches Steve Alford and Craig Neal. In the first game against the Wolfpack this year, the Lobos were blown out in Reno after giving up 17 threes.

Even with the home-court advantage, there is a very real possibility that the Lobos will struggle to defend the deep ball again. Jalen Harris led Nevada with 19 points last time out and will be the focal point of the Wolfpack attack once again. Without the ability to guard beyond the arc, it could be a long night for the Lobos.

Despite the previous loss, the Lobos do have The Pit on their side. The last time that Nevada traveled to Albuquerque, they were ranked fifth in the nation and were upset by 27 points. Another factor that can’t be overlooked is that both JaQuan Lyle and Vance Jackson were absent from the game in Reno.

Now that both players are both back in the lineup, they give the Lobos a different look. Not only does it allow the team to play more of an inside-out style, but it gives them a true threat in Lyle. The two time Mountain West Player of the Week still leads the Lobos with 15.6 points per game, even after having a few off nights. Provided that New Mexico can find a way to slow down Nevada, there is a chance of pulling off another upset.

With time running out in the season, the Lobos have to find a way to prevent cold starts and close out games if they hope to still have a chance at a postseason tournament.

Tuesday’s game is scheduled for a 7 p.m. (Mountain) tip from The Pit. Fans not in attendance will be able to watch the game live on ESPNU.