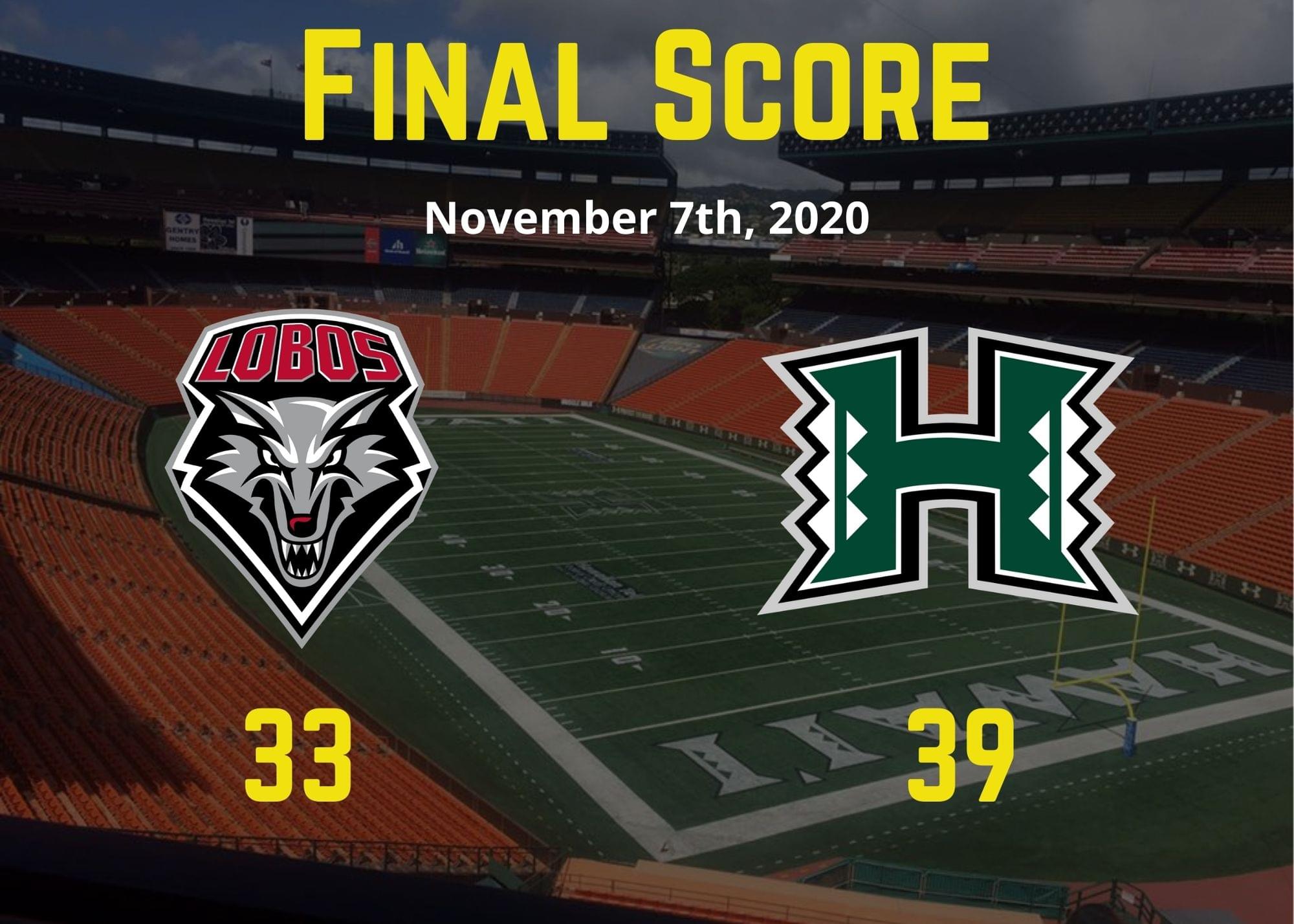 Just like the 2020 Presidential Election, it is not how you start but how you finish.

Tevaka Tuioti and the Lobos jumped out to an early 17-3 lead on the Rainbow Warriors at Aloha Stadium in Hawai’i on Saturday night, with two first quarter touchdowns to Jordan Kress and a 27-yard field goal by George Steinkamp.

The UNM defense started the game playing it’s best in quite some time, limiting Hawai’i to 14 first-half points, highlighted by a pair of interceptions by Jarrick Reed II.

UNM outgained Hawai’i 206 to 72 yards in the first quarter, as quarterback Chevan Cordeiro and the Rainbow Warrior offense failed to move the ball. The Lobos would head into the locker room enjoying a 20-14 lead, hoping to secure the first win of the Danny Gonzales era of UNM football.

Like the Biden/Harris ticket, the Warriors saved their best for the end.

Cordeiro completed 13 of 15 passes in the second half, for 223 yards and three touchdowns. He hit Zion Jones on a 40-yard strike with 11:55 left in the third quarter to give the Rainbow Warriors a 28-20 lead and sealed the victory with the eventual-game winning play with a 64-yard touchdown pass to Calvin Turner in the fourth quarter.

“I thought the fight was better. I thought we were more physical up front physically, and we were able to run the ball,” said UNM head coach Danny Gonzales in his post-game interview.” “But you can’t give up four long touchdowns in the passing game, especially two of them. If we just make a tackle, we can get the ball down and get to play defense again.”

New Mexico would make things interesting with a 26-yard touchdown rush by freshman Nathaniel Jones in the third quarter, and the Lobos took a 30-28 lead on a field goal by Steinkamp with 13:31 left in the game. It was the first rushing touchdown for Jones, a true freshman from St. John Bosco High School in Bellflower, California.

Despite their best efforts, the passing attack of the Rainbow Warriors proved to be too much for the Lobo defense, with Hawai’i pulling away late for a 39-33 victory.

On the positive side, the Lobos posted 499 yards of total offense, giving them back-to-back games of 400 yards or more. On the negative side, UNM lost the game despite winning the turnover battle 3-1.

The Lobos continue the 2020 season next week in a neutral-site matchup against Nevada at Sam Boyd Stadium in Las Vegas.

Still searching for the first win of the Danny Gonzales era of UNM Football, the Lobos face a difficult task against a Nevada team that ranks 9th in the nation in total offense.