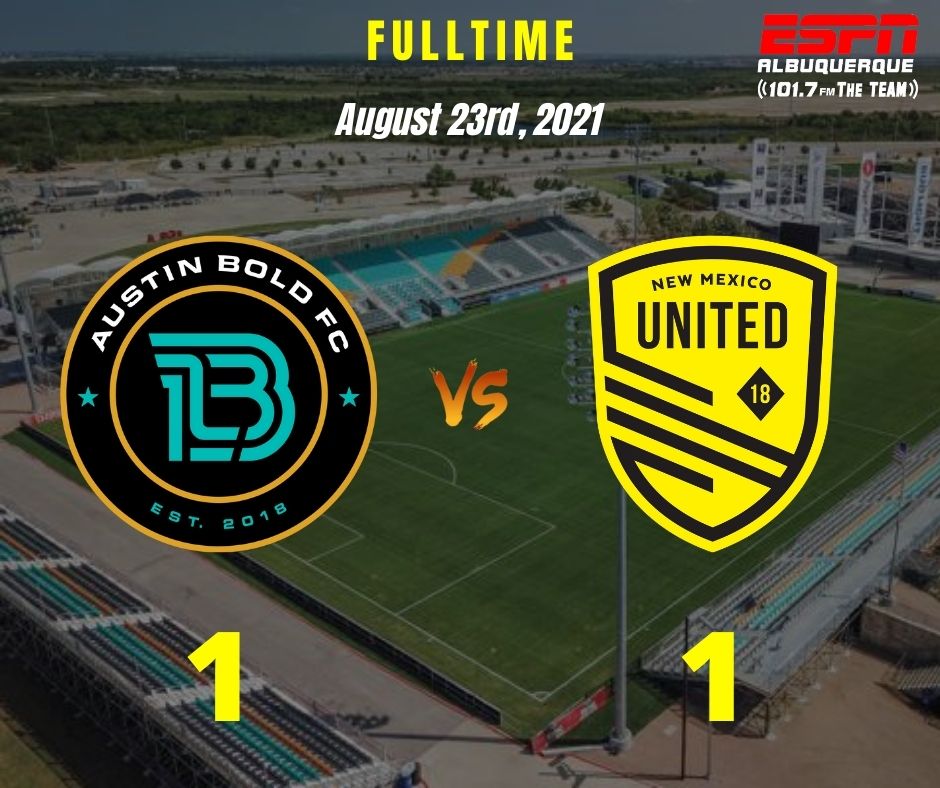 New Mexico United has a problem. After their fifth consecutive draw, United dropped points from a winning position for the seventh time in the 2021 campaign. In those seven matches, United has lost seventeen points after taking the opening goal.

In simpler terms, had United won those matches, they would have earned twenty-one points. Instead, they only earned four.

Just like the other matches, United looked strong in the first half against Austin Bold FC and took a lead into the break. Their opener came just after the half-hour mark, and it was a well-taken strike by the returning Chris Wehan. In his first start since rejoining the club, Wehan was the benefactor of some great hold-up play by Devon Sandoval. After Justin Schmidt won a 50/50 ball at midfield, Sandoval flicked the ball on towards the box where it took a deflection and fell to Wehan. On the half-volley, Wehan put his right foot through the ball and buried the shot into the back left corner of the net.

The battle for the night was in the midfield, and the two clubs didn’t disappoint. Back and forth they battled for control, and it was the visitors that held the majority of the possession throughout the night. Even with the possession heavily in their favor, United only managed to register six shots and two on target the entire match. As has been the trend this season, despite having opportunities to extend the lead, United couldn’t get it done.

Without that second goal, Austin was able to pull level in the second half. Just before the hour mark Jorge Troncoso made a run down the right wing trying to get past Josh Suggs. As they entered the final third, Suggs lost his footing, which allowed Troncoso to slide in behind him. With that movement, Justin Schmidt pulled out of the centreback position to try and defend Troncoso. In doing so, that opened up space for Roberto Avila, who was able to take advantage and put the through ball from Troncoso into the net.

For the fifth straight match, neither United nor their opponent could find a winner. With the playoffs drawing closer with every match, United cannot continue to drop points and keep their playoff hopes alive.

Chris Wehan – With his first start since returning to United, all Beez did was score the opening goal, play a full 90 minutes, and put out more energy than anyone else on the pitch. He constantly had his head up and was looking to connect and create opportunities for the other forwards.

The next challenge facing New Mexico United is a trip to take on Phoenix Rising FC. The two sides haven’t played since August 8, 2020. The last time they met, Phoenix came from behind en route to a 5-2 victory. Saturday’s match is scheduled to kickoff at 8:30 p.m. (MT).