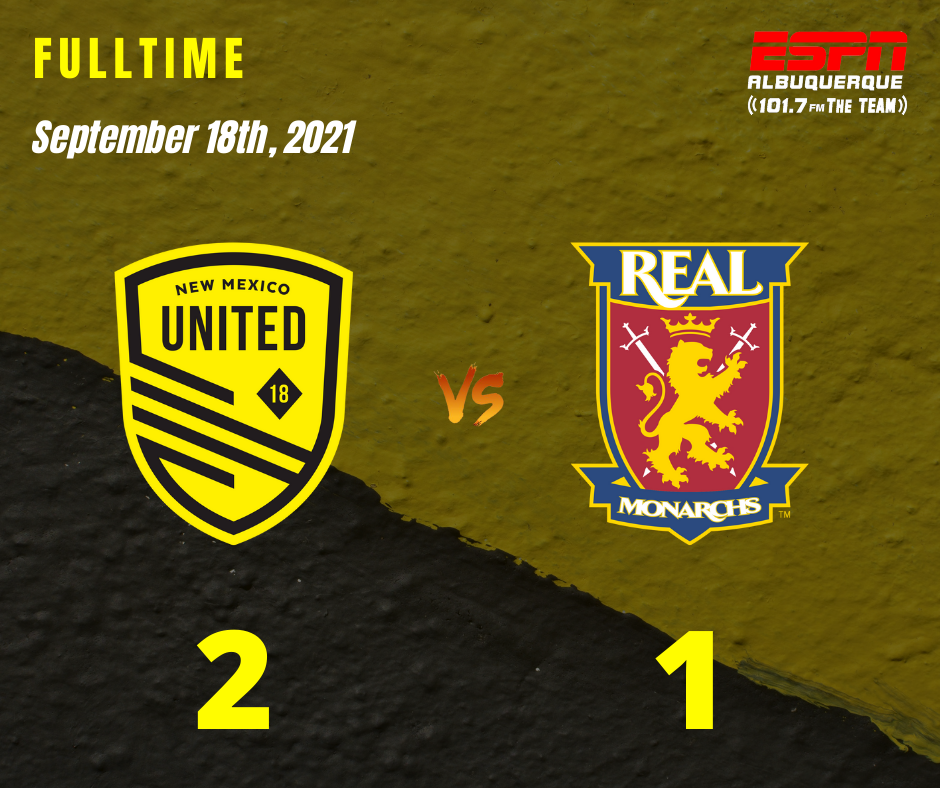 New Mexico United knew they needed a win on Saturday. With their opponent being the Real Monarchs, they knew they had the opportunity to keep pace with the other members of the Mountain Division.

With that in mind, United came out with an early press and tried to put pressure on Jeffrey Dewsnup, the Monarchs’ keeper. That press quickly died, though, after Amando Moreno picked up a yellow card in only the second minute for taking down Dewsnup. From there, United continued to control the match both in terms of the eye test and on the stat line.

Possession swung heavily in the favor of the hosts, and they registered twelve shots in the first half. Few of those shots were able to have an impact, though, as only three of them were on frame. Those efforts weren’t far from finding home, though, and the home club looked dangerous.

After the break, it was Moreno that found the back of the net first. Taking possession near the center circle, Moreno broke towards goal, and his footwork allowed him to beat multiple Monarch defenders. After breaking the ankles of defender Jaziel Orozco, Moreno cut back to his right and went into the upper corner of the near post. Dewsnup was left flatfooted and had no chance of stopping the shot.

Less than two minutes later, a second goal was added by a Wehan. Charlie Wehan, younger brother of Chris Wehan, made a run through the middle of the pitch into United’s goal area. Showing some speed, he was able to elude an attempted foul by Andrew Tinari and created enough space to create a shooting opportunity for himself. Going across his body, Wehan would put a left-footed shot into the bottom corner to equalize.

Devon Sandoval nearly put the hosts back ahead both in the 52nd and 56th minutes of the match. The earlier opportunity came after Dewsnup was forced into a deflection that fell to the United forward. Sandoval put his laces through the ball, but it caromed off the crossbar and back into play. The latter of the two chances came from the penalty spot after Daniel Bruce drew a foul on the left side of the box. Dewsnup guessed incorrectly on where Sandoval hoped to put the ball, but the attempt was sent down the center of the goal and struck the foot of the keeper, failing to cross the line.

Bruce once again impacted the outcome of the match in the 80th when he played a cross into the box looking for the elder of the Wehan brothers. This time it was Beez’s turn to shake the net as he headed the cross into the goal to retake the lead.

Now up 2-1, United continued to press for another goal and to seal the three points. Chelo Martinez took a chance from twenty-one yards out and was inches away from finding the net. Instead, the ball ricocheted off the post and directly into the path of Beez. With an open goal, he had plenty of time to put the shot where he wanted it, but the attempt was pulled just wide and out for a goal kick. The visitors wouldn’t get another attempt on goal before time expired, and United picked up their second consecutive win at home, keeping the playoffs within reach.

Jeffrey Dewsnup – The seventeen-year-old keeper had a fantastic performance between the sticks tonight despite surrendering two goals to United. He successfully saved seven shots from United, and without his efforts, the match could have ended in a much more lopsided result.

United are back on the road again next week when they face San Antonio FC for the third time this season. The two clubs have split the season series so far, with each side winning once. That match will take place on Saturday, September 25, at 6:30 p.m. (MT).