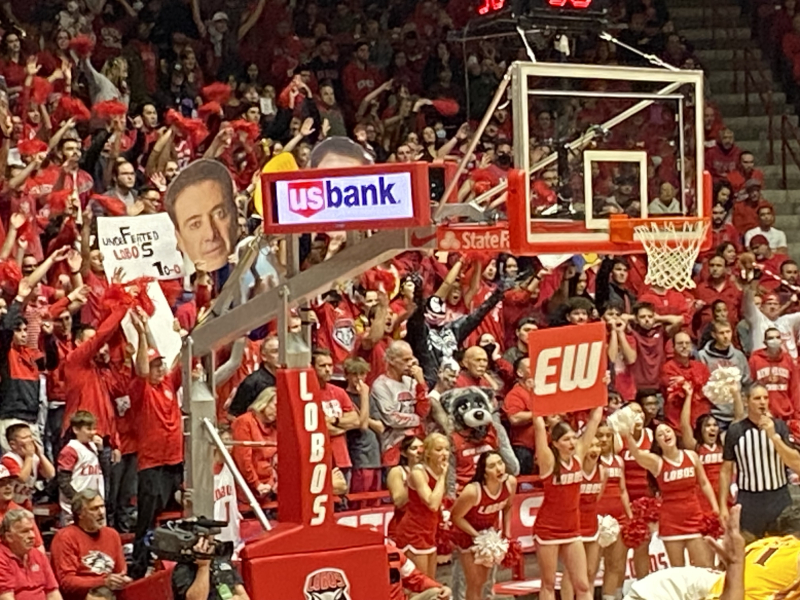 As the University of New Mexico Men’s Basketball team moves forward against Prairie View A&M and beyond, the buzz about Pitino vs. Pitino still lives on.

UNM, coached by Richard Pitino, defeated Iona, coached by his father Rick Pitino 82-74 Sunday evening at the Pit to improve to 11-0 on the season in the 21st edition of a father-son coaching matchup.

On the note, when you break down Sunday, it’s easy to do it from the way-back machine.

It seemed like a trip down memory lane to seasons which include 2012-13 where the Pit was indeed the Pit (a mile high and louder than …).

By the time the teams took the court for the first time, there was a buzz and it got bigger and bigger as the pregame clock got closer to zero.

When the clock struck zero and the National Anthem was performed, it was time for the starting lineups, and the arena staff clicked the play button for a pregame video that charged up the crowd even more.

By game time, if you were not into what was about to happen, you didn’t have a pulse. This was a version of a “Pit Game.”

Was it the loudest the Pit has ever been, hardly. I have only had the pleasure of experiencing true “Pit Games” a few times during my first season in Albuquerque before the Pit renovation.

The memory that comes to mind was the last regular season game at 18,018. Where when you screamed at the person next to you, you couldn’t hear them scream back.

There is loud, and there’s “Pit” loud.

Sunday’s crowd was one of the loudest in years, and the players responded with excitement in their play, as well as in their mannerisms.

Time will tell how the crowds will respond the remainder of the season, but just seeing and hearing the excitement in that building against a team that brought a little buzz simply because of the opposing head coach, it showed that the excitement experienced in the past can be brought back to life.

And regardless of the outcome, being in an atmosphere like what can happen at the Pit, how can you not go home happy knowing that you just enjoyed an entertaining experience.