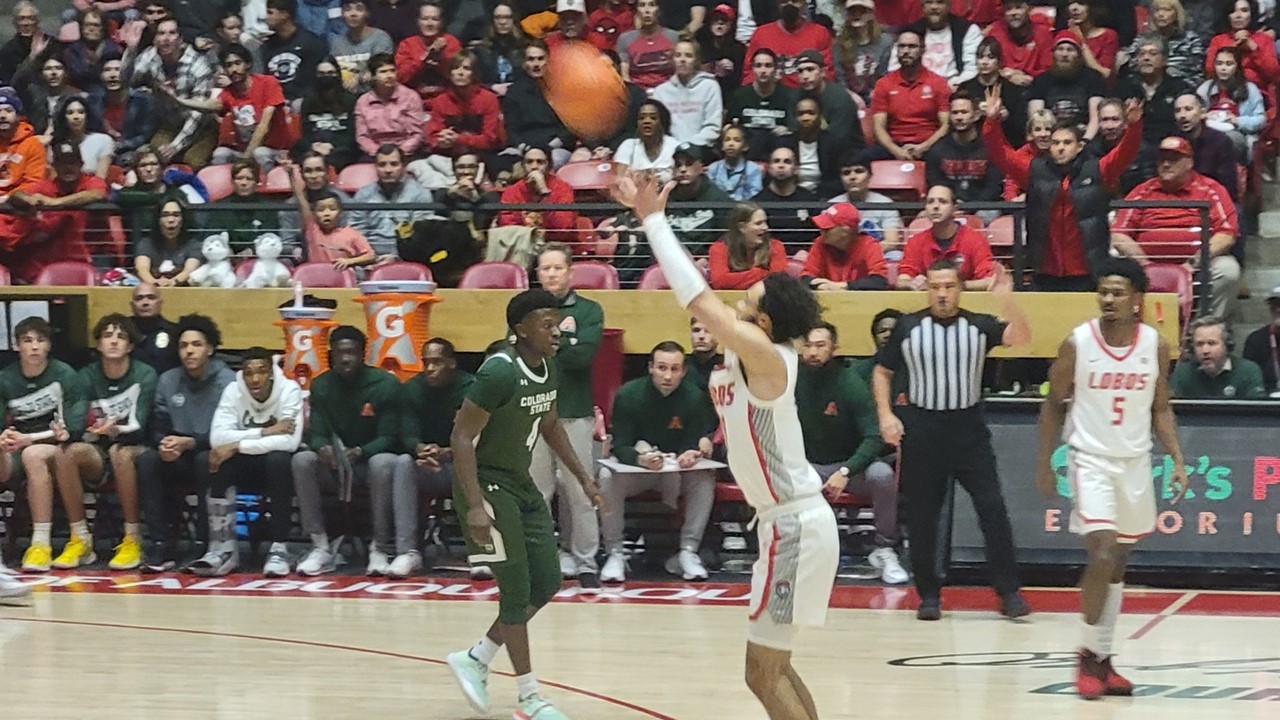 The number 12 has a special meaning in the archives of the University of New Mexico men’s basketball team.

Going into the Mountain West Conference opener with Colorado State on Wednesday, December 28, the Lobos entered the week ranked nationally at No. 22. For the first time since the 2013-14 season, they started a season 12-0, but the memory of the previous five 12-0 starts lurked in the rafters of The Pit.

On Wednesday, December 28, the elusive number 13 presented itself as a holiday gift with a bow in the shape of a ram as the the Lobos pounded Colorado State 88-67 in front of an announced crowd of 15,215 at The Pit.

Although Colorado State mounted a slight comeback in the second half, the outcome was never in question.

As he often does, Lobos head coach Richard Pitino gave the Lobo faithful credit for keeping the players energized.

“Just an amazing crowd,” Pitino said. “I can’t say it enough. To get 15-thousand during the holidays, on a weeknight, just amazing. We’ve got one of the best fan bases in all of college basketball.”

The focus is on a team who can surpass the 2012-13 team that was upset by Harvard. But a couple of immediate questions are in play.

Can the Lobos continue at the level of play they are experiencing throughout the rest of the season and in the post-season? Can they match the 1967-68 team’s 17-0 start or set a new school record? How strong a contender are the Lobos for the Mountain West championship?

The way this team isp erfoperforming, everything is possible.

When Richard Pitino starter his journey with the school, many wondered how long it would take to truly rebuild the team into a winner.

In year 2, the Lobos are already playing with house money.

And they played with House money against Colorado State as Jaelen House led the Lobos with 26 points.

House basked in the atmosphere against CSU.

“It feels good when you got your crowd on your side, just being loud, that gives us energy and we felt that tonight,” House said. “It’s just cool to have that. We didn’t have that last year, we weren’t good, so having this many fans every time now, I feel like that’s going to make us even better now.”

“This was an important game for me,” House said. “A lot of people have been saying Stevens is better than me and I just wanted to go out there and show them he’s not better than me.”

“Jaelen was phenomenal on Stevens,” Pitino said. “Just unbelievably disruptive, and overall, I just thought it was just a terrific game.”

Will they be cashing their chips in with an NCAA tournament bid, only time will tell.

In the meantime, anyone following this team’s run should just enjoy the ride.

Next stop on the ride, a road trip to Laramie to face Wyoming on New Year’s Eve.