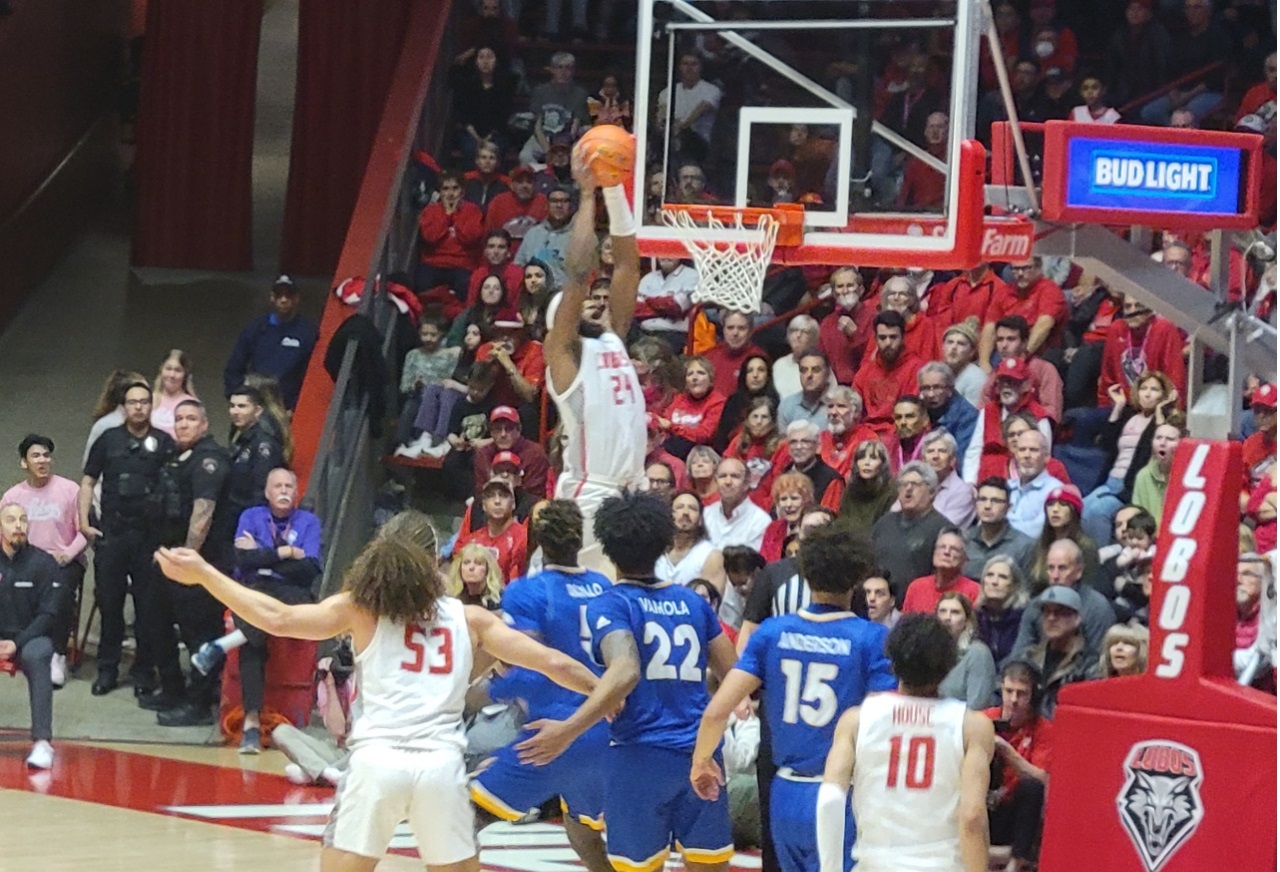 The University of New Mexico Men’s Basketball team has experienced the highs and the not-so-highs of momentum just in the past couple of weeks.

Heading into this week’s games at home against San Jose State and Boise State at the Pit, the Lobos were back on the high end of the pendulum swing after an emphatic 76-67 victory over then-No. 23 San Diego State at Viejas Arena in San Diego.

After a 14-0 start to the season, the Lobos entered Tuesday’s game against San Jose State at 16-2 and 3-2 in the Mountain West.

Jaelen House was instrumental in getting the team back in the winning swing last week as he led the Lobos with 29 points and four steals against San Diego State.

House averaged 22 points and 4.5 rebounds while adding five assists and seven steals in two games against Oral Roberts and San Diego State to earn his first Mountain West Player of the Week honors.

As the Lobos tipped off on Think Pink Night at the Pit, the tough race in the Mountain West was on the minds of many of the Lobo faithful, but history shows that this is a marathon and not a sprint.

San Diego State has always been a Lobo formidable foe, but Boise State, the Lobos’ opponent Friday night, have shown themselves to be in the mix along with Nevada and Utah State.

Jamal Mashburn Jr. and Jaelen House provided the one-two punch with each scoring 20 points to lead New Mexico. It’s the seventh time House and Mashburn each scored 20 in a game over the past two seasons.

Morris Udeze scored 17 points and grabbed 14 rebounds to collect his seventh double-double of the season. KJ Jenkins had 10 points off the bench.

Udeze’s seven double-doubles are the most by a Lobo in a season since 2013-14 when Alex Kirk had 14 and Cameron Bairstow had eight. Udeze became the first Lobo with four straight double-doubles since Joe Furstinger in 2017-18.

“I am proud of these guys to go from an emotional win at San Diego State and come back and be all business tonight against a San Jose State team we knew would be tough to beat,” Lobos head coach Richard Pitino said.

“I think we did a good job of contesting,” Mashburn Jr. said. “They can really shoot the ball. They’re a team that really gets a lot of threes up and we did a great job of getting to the shooters and contesting and making them a bit uncomfortable. I thought we did a good job on that end.”

New Mexico has not only rebounded in the paint, but also from two straight losses; They will now face a first-place team for the second time in less than a week when Boise State comes to the Pit Friday, January 20 at 9 p.m. MT.

The San Jose game was promoted as a “pajama party” at the Pit.

One thing’s for sure, there will be no rest for the weary.