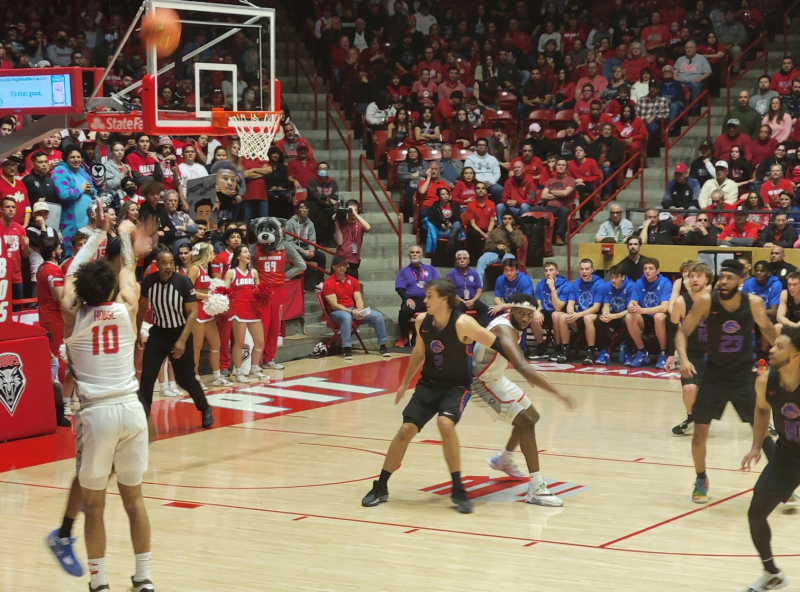 A wide variety of pajama-clad fans trapsed around the concourse, while others sported their cherry and silver.

The 9 p.m. start time didn’t diminish their loud voices as they gave the Boise State Broncos a Lobo welcome early and often from the minute the pajama party arrived in their seats.

On a night that featured the Lobos and Boise State vying for first place in the Mountain West Conference, the atmosphere had an electric, big-game feel.

When Jamal Mashburn Jr. canned a 3-pointer with 8:19 to play in the first half to give the Lobos an 18-16 lead, it was evident that the crowd was definitely not sleeping.

When Morris Udeze put in a layup off an inbounds pass from the baseline with 2 seconds to play, the fans erupted in a deafening roar.

In the end, the crowd played a major role in the Lobos 81-79 overtime victory over Boise State.

The win sent the upbeat fans home charged and the Lobos to an 18-2 overall record and a tie with Boise State (15-5) at 5-2 in conference, which already tied their conference win total from last season.

Pitino, as always, acknowledged the importance of the crowd.

“That was the loudest building I have ever been in by far. Not even close,” Lobos head coach Richard Pitino said. “Our fans were amazing. I felt horrible when we lost to UNLV when they showed out. How many places get these fans at 9:00 on a Friday night? They were unbelievable. They affected the game. I couldn’t hear myself.”

Many Lobos contributed in the victory, but the team was led throughout by the usual suspects.

Udeze poured in 15 points, including the game winner and collected five rebounds.

Josiah Allick netted eight points and grabbed a career-high 18 rebounds, including six on the offensive glass.

“I just came into the game and I had a little bit extra juice and I was going to make sure guys got every single drop of this,” Allick said.

Allick’s 18 rebounds were the most by a Lobo since Carlton Bragg had 18 vs. McNeese State on October 16, 2019, and the most against a conference opponent since Bragg had 20 boards vs. Wyoming on March 9, 2019.

Allick praised the crowd as well.

“”It was huge because I’m pretty sure people were going to start saying ‘don’t pack the Pit because we aren’t going to win,’” Allick said. “So being able to win in front of an amazing crowd we had tonight, I don’t how many were here, but it was insane,”

The game had the feel of a prize fight with each team exchanging jabs and body blow with neither team flinching before Boise State raced up the Pit ramp with a 37-31 halftime lead.

When Udeze threw down a dunk to force a Boise State timeout with 14:13 remaining in regulation time to tie the game at 42-42, the Pit was in a bedlam.

Josiah Allick put the Lobos up 53-52 with 9:40 to go and Jaelen house hit a jumper in the paint to take a three-point lead.

Tyson Degenhart’s 3-pointer with 3 seconds to play sent the game to overtime and gave the crowd a hint of a night terror.

“I think that’s kind of why they’re able to kind of like put away so many teams because no one really like gives them the respect that they deserve,” Allick said of Boise State. “This one’s massive because obviously losing to Fresno and UNLV, and luckily getting to bounce back with a win at San Diego State and now a win with Boise at home, it’s a great sign for us.”

The Lobos regrouped in the extra five minutes to gain the hard-fought win.

The Lobos now move onto Monday’s game on the road at Nevada with focus and a bit of swagger.