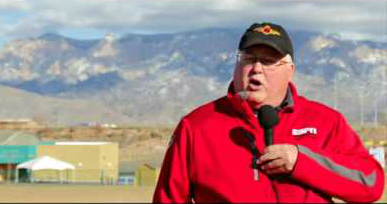 Marty played football at Albuquerque Sandia High School and was voted to the All Albuquerque City Football Team in 1970 as all-purpose back and receiver. He went on to play college ball which included two years at New Mexico Highlands University as a wide receiver and kick off returner. Marty returned to UNM and started playing rugby for the UNM Lobos for the 1973 rugby season.

In the fall of 1974 Marty started his 20 years of club rugby career playing wing/outside center and scrumhalf position for the Albuquerque Aardvarks Rugby Club, Marty was one of Original founders of the Aardvark Rugby Club/ And he also play for San Francisco Rugby Club.  While with the Aardvarks he represented the Rio Grande Rugby Union, and the Eastern Rockies Rugby Union, in select side events in Kansas City, Little Rock, Denver and Houston. Marty also represented San Diego County Playing for San Diego North County Rugby Club.

Marty’s local rugby honors date back to the dark ages of rugby locally, as the one of the early President of the High Desert Classic (1976, /77, /78) and Second President Of the Rio Grande Rugby Union (1975/76/77). He also served on the Western USA Rugby committee for rules and tournament organization committees. He also serve on the Chicago Lions Rugby Club Board back in the mid 90’s and is one of the Founder organizer of the Chicago Celtic Sevens tournament held every June during the Chicago Scottish Games. In 2013 Marty was elected in the Albuquerque Aardvark Rugby Hall of Fame.

In his professional life, Marty was contracted by DBGH Agency out of Dallas Texas to be the Marketing Director for University of New Mexico sports programs from 1980 to 1982 and worked directly under the SID John Keith and UNM Athletic Director John Bridges. In 1981 the New Mexico Football program was voted as the best college football program voted by the all of NCAA SID in the USA. In 1983 Marty was on the organizing committee for the 1983 NCAA Women’s Tennis championship held at UNM Lobo Tennis club. Marty was responsible for bring in McDonald’s as the main sponsor for NCAA Championship event. He also raised the money for the scoreboard that was use for the NCAA Tennis Championship.

For the past 16 years Marty was an IT Consultant and Marketing Rep for MicroTek, A leader in the Classroom Training Industry HQ in Chicago IL. In addition, Marty has been on the NM Games Board of Directors for the last 7 Years.

Last fall of 2014 Marty host an This Week in High School Football radio show every Wednesday evening during the football season for ESPN radio.