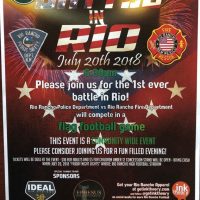 The event was put together by the Rio Rancho football booster club after it was brought to the attention of Rams head coach David Howes that this would be an event that could be made possible. “At the end of the day, we want to get connected with our first responders in any way we can, and we want to make sure that any opportunity we have to get with the police and fire department and the military or anybody else we can to connect our community, we try to do so,” Howes said.

Rams football booster club president Jason Silos said the process has been an exciting and exhausting one putting the event together. “The process has been really exciting, me and the team, the booster board, we’ve really put our heart and soul into getting this going, trying to get it out there as much as we can,” Silos added. “We’re very excited, this is something that Rio Rancho’s needed for quite a while, we just want the community involved.”

Fire department participant and newly promoted captain, Damian Mainolfa, is also excited for the opportunity to get out onto the field and settle their friendly rivalry with the police department. “Anytime there is a chance to play the police department, we’re always in,” said Mainolfa. “We have a pretty good relationship with the Rio Rancho Police Department, so even though there’s a rivalry there, it’s a friendly rivalry. Everyone’s pretty excited.”

Coach Howes believes that this event can help close the gap that is currently present in society in their community of Rio Rancho between first responders and the people they serve. “When you start looking at where our world is today and with all the negativity we have to deal with and the splitting in America today, you have first responders and police officers that are seen in the negative light sometimes, and we want to show what these people are all about,” Howes added. “The difference is, when they are putting their badges on every day, they’re really risking everything for us and our safety.”

If you would like to take part in joining this event, the event begins at 6:30 pm on that Friday night. The admission is $10 for adults and $5 for children under the age of 12, and the concession stand will also be open.