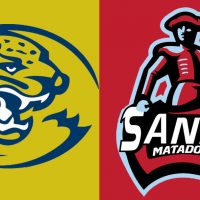 101.7 The TEAM continues its coverage of high school football with Week 2’s Better Business Bureau Game of the Week Friday. This week, Wilson Stadium will be in the spotlight when the Atrisco Heritage Jaguars pay a visit to the Sandia Matadors.

The Jaguars struggled in their season opener this past Saturday, a 45-13 loss to the Mayfield Trojans at Community Stadium. In that game, Atrisco was pushed back to minimal rushing yards and only had one big scoring play. “It was a tough game, our offensive line was pretty raw and it showed in that game, but Mayfield, they are a big, strong team and they brought it to us,” Atrisco head coach Patrick Johnson said about what stood out from that contest.

In the Jaguars’ game with Mayfield, a quarterback battle ensued and will continue in this game with Sandia, as the team is currently rotating Carlos Salazar and Julio Burroell at the QB position. Jordan Marquez, Jesus Jimenez and Antonio Gonzales assume running back duties. Jimenez had one of Atrisco’s touchdowns in their last game.

To no surprise, Coach Johnson said that the Jaguars defense is going to have to stop Sandia’s running game. “I saw them play their first week, we gonna have to stop their running game. If we can do that, I think we have a good shot against Sandia.” he said.

Speaking of Sandia, the Matadors competed with the Cibola Cougars on opening night last Thursday, falling just short to the Cougars, 27-21. “Our kids really fought back, we ended up going down 14-0 and we threw a pick-six with six minutes going in the first quarter, but we came back and tied it up and we were trying to take the lead just before half,” Kevin Barker, head coach of the Matadors, said about that game. Barker also acknowledged in the interview that he felt Cibola was a strong team to compete against, and they were excited to bust out the new black and red jerseys on opening night.

This game versus Atrisco is a game that Coach Barker has also said is one they’ve had circled on their calendars ever since they got their schedule. Atrisco strongly defeated them last season, 33-15. “It’s a game that we’ve really had circled since we got our schedule because we felt like that was our worst game last year, we got handled by them pretty much, felt like that was the game that probably kept us out of the playoffs,” Barker said. “Their defense does multiple fronts, and they send from all different angles, so we gotta get our linemen communicating so we can pick those up. They do cause some trouble for you.”

Matadors running back Leshawn Joseph was the star of the last game for the Matadors, rushing for 231 yards and three touchdowns on 26 carries. “It was my first game starting, and I was just a little bit nervous, but my O-line did a good job of blocking and everything, and I knew I just had to run hard,” said Joseph about his performance. Preparing for this week, Joseph is ready for some running against Atrisco. “My keys are the cutbacks, because they flow hard.” he said. Despite only completing 35% of his passes last game, Matador QB Junior Silva will be key in the case that Atrisco is able to shut down Sandia’s run game.

Back on the call will be Scott Galetti and the coach, David Williams. The pregame show will begin at 6:30 pm, right after the conclusion of The Locker Room with Bob Brown. Gametime is at 7:00 pm.