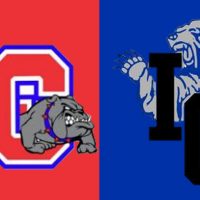 Week 3 of the high school football season is upon us, and 101.7 the TEAM brings you more coverage of the state’s top teams with the Better Business Bureau Game of the Week. This week, we take you back to Wilson Stadium in the battle of the “LC’s,” as the Las Cruces Bulldawgs make the trip up north to take on the La Cueva Bears.

The Bulldawgs enter the contest with an even 1-1 record, their recent game being a loss at the hand of the Eldorado Eagles, a game that Las Cruces’ defense allowed 70 total points, nine of the touchdowns from Eagles’ QB Gabe Smith. “The biggest thing we’ll probably take from that game is just little things, how much little things make a big difference, we didn’t execute the little things, especially defensively,” Bulldawgs head coach Mark Lopez said. “I was really happy with our guys, how they just continued to persevere and show that tenacity, to compete all the way down to the last whistle. We’re excited about the opportunity to learn from that and get better.”

Las Cruces’ offense, led by quarterback Marcos Lopez, will have the tough task of matching up with La Cueva’s defense. So far this season, Lopez has gone 15-29 for 257 yards and two touchdowns, which includes his 10-20, 117 yard, and two TD performance against Eldorado. “I thought we did a good job just fighting to the end of that game, despite what the score said,” said Lopez about their previous game. “We’re gonna go work hard this week. We’ll go put some points up, and hopefully our defense can get some stops, and hopefully, we can come out with the win.”

The dynamic running duo in Chase Chaloupek and Ivan Molina will also be key for the Bulldawgs offense. Last week, Chaloupek had 12 carries for 112 yards and a touchdown, while Molina had nine carries for 161 yards and a touchdown. “I feel like we just have to have a high level of preparation and be aggressive, just be ready to make plays,” Chaloupek said about their upcoming game. “…I just need to keep the ball moving on offense, run as hard as I can, just do my job.”

Their adversary in the Bears are coming off of a dominant 45-0 shutout win against Valley and currently stand with a 2-0 record. “On film, we knew that they were going to be big and aggressive. We were expecting a battle with them,” Bears head coach Brandon Back had to say about their recent performance. “That’s kind of what our game plan was going into the week, making sure our defense was sound.”

Going into this next game with Las Cruces, the Bears will be putting an emphasis on making sure they know where Molina is on the field. “We gotta make sure we know where (Molina) is, that guy has been such a special playmaker for the Bulldawgs for the last four years,” Back added. “For us, it’s making sure we line up and do what we do, and not get wrapped up in what happened last week.”

Despite not playing in the entire second half of their game against Valley, Bears QB Dylan Summer is ready to get back into action. “We got to make sure we can get completions downfield,” Summer said. “They’re a good team, they are good against the run, and we just got to make sure we execute our stuff.” In that last game, Summer went 11-20 for 172 yards and a touchdown. He’ll be joined by D’Andre Williams and Noah Woisin at running back, a dynamic duo just like Molina and Chaloupek for Las Cruces. Williams had 11 carries for 130 yards and a touchdown in their last game, while Woisin had seven carries for 19 yards and a touchdown.

Prince “Nas” Robertson and Connor O’Toole lead the receiving core for the Bears, with Robertson leading the way in their last game with five catches for 144 yards and a touchdown, accounting for 53% of La Cueva’s total passing yards last game.

Scott Galetti and Coach David Williams will have your call starting with the pregame show at 6:30 pm on Friday right after The Locker Room with Bob Brown.