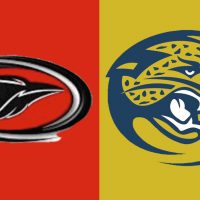 101.7 The TEAM welcomes you back to high school football action this Friday heading into the heart of district schedules for New Mexico high school football teams. This time around, we take you to Nusenda Community Stadium for the first time this season as the new and improved Rio Grande Ravens face off with the Atrisco Heritage Jaguars.

The Ravens are already having themselves a historic season, snapping a 39-game losing streak with a win over Valencia Week 3 by a score of 38-22. “The kids were just well-poised and they just played their hearts out. They were jubilant. I mean, the whole south valley community around Rio Grande High School was ecstatic,” Ravens head coach Dennis Minidis said. Later on, he proceeded to jokingly say, “As a football coach, I looked in the mirror and said, ‘Well Dennis, it’s about time.’”

Rio Grande’s offense is led by quarterback Aaron Pavia, who went 12-24 for 146 yards in their last game with Sandia. “We’ve been practicing real hard, they’ve got some good coaches over there, they’ve got some good players too,” Pavia said about preparing for Atrisco. “A lot of it comes down to your head, like, how bad do you want it? I feel like us Rio Grande Ravens want it more.”

Assuming running-back duties is Hans Malubay, who also has been playing well for the Ravens. In their last game, Malubay had 12 carries for 96 yards and a touchdown. “Atrisco is a much-anticipated game, and this is also a game we’re most excited about. We can’t take them lightly because they’re 0-4,” said Malubay. Fans will also see Gene Gonzales taking some carries for Rio Grande. The role of the receiving yards belongs to seniors Oscar Bencomo, Cruz Bolivar, and Mario Armendariz. The three combined for 11 catches for 114 yards in their last game.

To prepare for Atrisco Heritage, head coach Minidis says that they have to eliminate any foolish mistakes they make, the prime example being their second half play in their last game against Sandia. “We played a very good, solid first half, and I felt the second half, we got a little sloppy, took our foot off the pedal, and let the game get out of our reach,” Minidis said. “We just have to clean up the little mistakes that we made, and we’ll be right in the game with Atrisco.”

The other side of the field sees the Jaguars, who still are looking for their first win of the season, and the Ravens are their next opportunity to do just that. “It’s been a pretty challenging season for us this year. We’ve had a lot of injuries. We’re trying to overcome those, playing a lot of young guys,” Jaguars head coach Patrick Johnson said. “We had a bye week last week, and I think we had a really good week of practice, and we started this week really well.”

Atrisco Heritage has continued to go with their quarterback rotation in Carlos Salazar and Julio Borroel. Jordan Marquez assumes running back duties with Antonio Gonzalez right behind him. Zach Carmignani leads the way in receptions for the Jaguars.

Scott Galetti and coach David Williams will have your call this Friday starting at 6:30 pm for the pregame show.