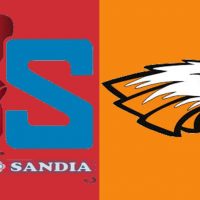 After a month-long hiatus, ESPN Radio 101.7 The TEAM returns to its coverage of high school football, and as the season comes to a close with the final week of the regular season on Friday, we take you out to Wilson Stadium, when the Sandia Matadors face off against the Eldorado Eagles.

Despite these two teams having struggles throughout their season, this game will have implications on state seeding and selection when it comes to that time on Sunday. According to Adam Diehl of ProView Networks, his analysis says that Eldorado must win this game against Sandia, or they are out of the state tournament, which would allow the current projected 12 seed, Carlsbad, to slide into the 11 seed, and bubble-team Cibola to sneak into the 12 seed spot. Those seedings are also according to Diehl’s latest bracketology. Unfortunately for the Matadors, their record is too low for them to make a quest at the state tournament.

The biggest question that still arises from this game is, will Eagles starting QB Gabe Smith return from his collarbone injury sustained in their Week Five contest? Eldorado head coach Charlie Dotson says, he is still on a week-to-week status. “It’s week-to-week. We won’t know until the doctor clears him, and he hasn’t cleared him yet,” Dotson said about Smith’s return. So for right now, Smith is still out for the Eagles.

Filling that spot for the past four weeks has been Nick Petty, the 6’0” sophomore. “I think the top priority at this point is to win by whatever means necessary,” Petty said about the upcoming game. “We need to stay positive, be physical, be fast, and when things don’t go our way, turn the page, and play like the Eldorado Eagles know how to.” So far, Petty has made good filling that position, with statistics of 689 yards and nine touchdowns on a 49% completion percentage.

Backing up Petty in the running game has been Ben West, the 5’10” junior who has so far rushed for 396 yards and ten touchdowns on the season. “…the last three games we have lost, our team has not come close to playing our best football,” said West. “This entire week, we have been working on getting back to our old ways and play football like we know how to.”

Headlining the receiving core for the Eagles is Trey Duran, who has caught for 586 yards and seven touchdowns. Joining alongside him is Zach Hofman, who has 442 yards and nine touchdowns.

Coach Dotson knows the implications this game will have on his team. “We just have to have the real Eldorado team show up, the team that played the first seven games, not the one that’s played the last two weeks,” Dotson had to say. “We just wanna get back to playing mistake-free.”

The Matadors, even though they are out of the race for a spot in the state tournament, knows that they could impact the state tournament in a way just by pulling off an upset Friday. “That’s definitely been on our minds. This season hasn’t gone the way we wanted it to go, but that’s the goal at the end of the week, being able to knock one of your rivals out of the playoffs,” Sandia head coach Kevin Barker said.

The offense is led by QB Junior Silva, who has so far thrown for 983 yards and six touchdowns on the season. “As a team, we’re really motivated to go out and play,” Silva said. “Our focus is to go out and play hard and end the season on a good note.”

Leshawn Joseph anchors the running game, with 862 yards and ten touchdowns on the season so far. “The whole team, actually, has just been focused this week and just ready to go out and knock Eldorado out of the playoffs, so next season, we can just have a good mindset,” said Joseph.

Coach Barker said that they are very excited for the challenge of Eldorado, and want to pull off this upset. “Everything’s gonna be on the table,” Barker said. “We’re gonna do some different things against them, and truly out of necessity, but the kids are excited about the game plan, and hopefully we’ll be able to execute it at a high level.”

Scott Galetti and coach David Williams have your call starting with the pregame show at 6:30 pm at the conclusion of the Jim Villanucci Show.