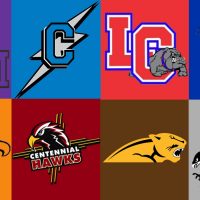 After a hectic previous week of the first round filled with statement wins and upsets galore, we are now ready for quarterfinal action in the NMAA Class 6A football playoffs. Here’s a preview of each game to take place this week.

Winner of Volcano Vista vs. Cibola

The number-one seeded Cleveland Storm will get their first chance to showcase their skills in the Class 6A playoffs when they host the eighth-seeded Manzano Monarchs on Friday night.

The Storm return from their bye week fresh off of another undefeated regular season for the program, capping it all off with a dominant 42-7 win over cross-town rival Rio Rancho for the District 1/6A championship. Cleveland has had one of the most dominant offenses this season, outscoring their opponents, 483-156.

Throughout the year, Cleveland’s offense was led at running back by Dorian Lewis, but Lewis went down with an injury in their Week Nine contest with West Mesa, putting him out for the rest of the season. Stepping in to fill Lewis’ spot is Colten Madison, the 5’9” junior, who has so far rushed for 325 yards and eight touchdowns on the season. Jeff Davison takes the reigns at quarterback, going 95-151 for 1,815 yards and 23 touchdowns. Backing him up are his receivers, Tre Watson, Randy Nieto, and Braedin Ross, who combine for 1,434 yards and 17 touchdowns on the season.

On the other hand, Manzano is coming off of their win against Rio Rancho, a statement-like, 40-14, victory over the Rams. The Monarchs started slowly this season but ended up becoming contenders in District 2/6A with a 3-1 record in the district. Their only loss in district was to the eventual champions, the La Cueva Bears.

Dakota Powell, the senior quarterback who has led Manzano’s offense all season, went 14-22 for 219 yards and four touchdowns against Rio Rancho last week and will look to have a similar performance to potentially lead his team to victory. Xavier Ivey-Saud anchors the running game for the Monarchs. Last week, he carried 30 times for 205 yards and a touchdown. Austin Erickson and Jack Blankenship each picked up two touchdowns last week, and take care of the receiving game for Manzano. The two also combined for 205 of Powell’s 219 yards.

Winner of Centennial vs. Eldorado

In a rematch from Week 3 of the regular season, the undefeated second-seeded La Cueva Bears will take on the seventh-seeded Las Cruces Bulldawgs at Wilson Stadium on Friday night.

The Bears capped off their undefeated regular season with a tightly-knit 10-7 win over the Clovis Wildcats for the District 2/6A championship. La Cueva was able to clean out most of their opponents before it came to district time. After the season concluded, the Bears outscored their opponents, 367-135.

La Cueva’s offense has been led all season long by senior quarterback Dylan Summer, who has so far thrown for 1,895 yards and 14 touchdowns on the season. The rotation of D’Andre Williams and Noah Woisin handles the running game for the Bears, the two combined for 1,277 yards and 18 touchdowns. Prince “Nas” Robertson and Connor O’Toole are the dynamic duo at the receiver spot, these two also combined for 1,426 yards and 13 touchdowns.

Las Cruces snuck out a very back-and-forth, 24-21 win, over the Clovis Wildcats in the first round to advance to the quarterfinals. After a slow start, the Bulldawgs found their groove during district play and have made their case so far as contenders in the state tournament.

For the first time in New Mexico high school football history, the third-seeded Centennial Hawks and the 11-seeded Eldorado Eagles will share the field together, and this time, it will have a lot of the line, which is a spot in the semifinals.

Returning from the bye week, Centennial capped off an undefeated season two weeks ago with a 42-0 win over Gadsden. This allowed them to officially secure the District 3/6A championship and the three seed in the state tournament.

Lance Frost leads Centennial’s offense at quarterback. In their last game against Gadsden, Frost went 9-15 for 115 yards and two touchdowns. Throughout the season, Frost has also thrown for 1,176 yards and 15 touchdowns. Gabriel Acosta and Adrian Gomez anchor the running game for the Hawks, the two combined for 733 yards and eight touchdowns. Leading the receiving game is Darren Rodriguez and Aidan Trujillo, these two combine for 767 yards and 10 touchdowns.

The Eagles, who were one of two teams to pull off an upset in the first round of the Class 6A playoffs, witnessed the great return of their injured starting quarterback, Gabe Smith in their 28-14 upset win over Hobbs.

Unfortunately, Smith will not be returning for Eldorado in this game, so backup quarterback, Nick Petty, will return for the Eagles and take the helm for the offense. Ben West will get the carries for the Eagles in the rushing game, while Trey Duran, Sean Fischer, and Zack Hofman will catch the passes for Eldorado.

Winner of Cleveland vs. Manzano

A battle of district rivals will ensue at Nusenda Community Stadium Friday night when the fourth-seeded Volcano Vista Hawks host the lowest seed in the tournament, the 12th-seeded Cibola Cougars.

Volcano Vista returns from the bye week after finishing as the runners-up of District 1 behind Cleveland. The Hawks capped off their season with a 35-21 win over Cibola, and now, the Hawks look to repeat that same result with this exact opponent for the second straight week.

Jake Deatherage leads the offense at quarterback for the Hawks, so far throwing for 1,641 yards and 21 touchdowns on the season. Despite Deatherage leading Volcano Vista in rushing yards, Isaac Chavez takes care of the running game for the team, rushing for 277 yards on the season. Catching the passes for the Hawks is Joah Flores and Jacob Werner, who combine for 1,125 yards and 14 touchdowns.

The Cibola Cougars, who entered the tournament as the heavy underdogs, snuck out a 14-7 win over fifth-seeded Mayfield in the first round. Now with a win under their belt and momentum on their backs, the Cougars are looking to grab yet another upset win against their district rivals.

101.7 The Team will have an in-depth preview of the game we will be broadcasting on Friday night, which is Cleveland vs. Manzano.