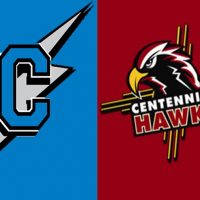 And then there were four.

The four best teams in New Mexico’s Class 6A high school football will square off in the semifinals of the state tournament for their shot at the state championship game just a week from now. Here’s a preview of the two upcoming games.

In a battle between two district rivals who know each other well, the undefeated one-seed Cleveland Storm hosts the fourth-seeded Volcano Vista Hawks in a rematch of their Week 8 contest where the Storm won a back-and-forth offensive battle.

The Storm, who are coming off of a win against the eighth-seeded Manzano Monarchs, proved that they could be a strong team even without star running-back, Dorian Lewis, with a 41-22 win over the Monarchs on Friday. With the win, the Storm continued to prove their dominance and why they are an undefeated team.

Jeff Davison holds down the fort at quarterback for Cleveland. In their last game, Davison went 12-23 for 213 yards and one touchdown. Filling in Lewis’ position is junior Colten Madison, who rushed for 136 yards on 22 carries and two touchdowns. Tre Watson, Randy Nieto, and Braedin Ross anchor the receiving core for the Storm.

Volcano Vista proved to be a contender who can compete well with the rest of the field, after a statement, 42-14 win against the momentum-riding Cibola Cougars last week. After finishing behind Cleveland in District 1/6A standings during the regular season, the Hawks are ready for their second crack at the Storm, this time, for all the marbles.

In a battle of two of the three undefeated teams in Class 6A, the two-seeded La Cueva Bears host the three-seeded Centennial Hawks in a battle of two top teams looking for a shot at the blue trophy on Friday night.

La Cueva is looking to bounce off their momentum after a squeaky-close, 17-14 win, over the seventh-seeded Las Cruces Bulldawgs. Winners of District 2/6A, the Bears have battle-tested over and over again this season, and are going to experience another battle when they take on Centennial.

Centennial, coming off of an also close, 37-24 win over the Eldorado Eagles, also have proven their case throughout the season about the toughness of their team and why they are an undefeated-caliber team. The Hawks capped off their season by securing the District 3/6A championship.

Taking the reigns at quarterback for Centennial is Lance Frost, who has so far thrown for 1,343 yards and 17 touchdowns on the season, which includes his 167-yard and two touchdown performance against Eldorado. Gabriel Acosta and Adrian Gomez anchor the running game, as the two combined for 764 yards and eight touchdowns. Catching the passes is Darren Rodriguez and Aidan Trujillo, who combine for 851 yards and 10 touchdowns on the season so far.