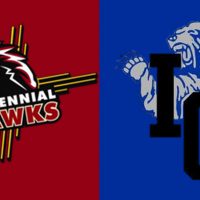 The Class 6A semifinals in New Mexico high school football are promising to be exciting contests, and ESPN Radio 101.7 The Team brings you one of those exciting matchups on Friday night when the undefeated two-seed La Cueva Bears host the undefeated three-seed Centennial Hawks.

Centennial is coming off of a back-and-forth, 37-24 win over the 11th-seeded Eldorado Eagles last Friday night in the quarterfinals. That game was a contest that Hawks head coach Aaron Ocampo said he, “…kinda knew Eldorado would come out and play a really good game,” Ocampo knew this based on the conversation that he had pregame with Eagles head coach, Charlie Dotson.

Leading the offense for the Hawks is quarterback Lance Frost, who has so far passed for 1,343 yards and 17 touchdowns on the season. That includes his 167-yard and two touchdown performance against Eldorado last week. His keys to the game will be to focus on the one-on-one matchups on the field. “We can tell La Cueva has very good athletes on both offense and defense. Their defense moves very well,” Frost said. “The key to (the game) is gonna be a lot of one-on-one matchups, and we gotta be able to win those most of the time.”

Even though Frost also leads the team in rushing yards, Gabriel Acosta and Adrian Gomez are the rushers for Centennial, as the two combined for 764 yards and eight touchdowns on the season so far. “I think it’s gonna be a hard fought game, it’s the playoffs, everybody steps it up a level,” said Acosta. “We know that (La Cueva) are all-around a pretty good team. We know they’re gonna come out and fight, but we just have to have four good quarters of football if we wanna try to win.” Catching the passes for the Hawks are Darren Rodriguez and Aidan Trujillo, who also combine for 851 yards and 10 touchdowns on the season.

Preparing for a team like La Cueva, Coach Ocampo and his crew are ready for the challenge of another undefeated team in the state. He says he knows what La Cueva can bring to the table, and knows he is ready for that kind of challenge, especially with a defense like the Bears’.

“La Cueva’s defense is just very good, and they’re so athletic at every position. We haven’t played a defense this year (like theirs),” Ocampo said. “They all run well, and they’re all physical. They do a good job with their defensive scheme. It really fits their talent level that they run so well. They man you up most of the time at receiver, and they take away any quick passing game you wanna try. So it’s gonna be quite a challenge for us.”

The Bears, on the other hand, are also fresh off of a close win, 17-14 to be exact, against the seventh-seeded Las Cruces Bulldawgs. During the down stretch of that game, the defense for La Cueva had to buckle down to secure the victory.

“The defense made plays all through the night. We made an offensive mistake that was a pretty big mistake that allowed them to kinda claw back into the game,” Bears head coach Brandon Back proclaimed. “Our defense definitely did their job, our offense made plays when they needed to, and again, Dominic Camacho comes in and makes another big kick that ended up being the difference in the game.”

Dylan Summer takes care of the passing for La Cueva. So far, he has thrown for 2,066 yards and 15 touchdowns on the season. “Plain and simple, we have to be better than we have been in our execution of the offense,” Summer said about the keys to the game against Centennial. “We can’t let our defense bail us out every week. It will come back to get us eventually.”

“Nas and I have played together for many of years, we’ve trained together all offseason. One of our goals was to be the best receiving duo in the state,” O’Toole said. “The coaches put together a great gameplan that’ll put us in the right position to make plays. We just have to execute Friday night.”

Coach Back knows what kind of team Coach Ocampo can bring to the table, especially their strength on the field. “I think Centennial will probably be one of the strongest teams we face. Coach Ocampo is very well known as an offensive coordinator and head coach, and I think a secret to his success in a lot of situations is what he does in the weight room in the offseason,” Back said. “They’ve got a couple of big, tall receivers, and for us, we gotta find a way to make (Lance) Frost more of a game plan…”

Scott Galetti and Coach David Williams will have your call after the conclusion of the Jim Villanucci Show on Friday night.