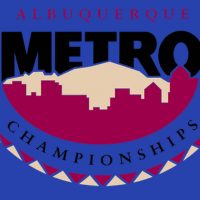 Starting this Tuesday, the Albuquerque Metro Championships basketball tournament will begin with its first-round matchups, and 101.7 The Team will bring you coverage of the boy’s basketball bracket semifinals later on in the week on Friday. The following is an overview of the entire boy’s field to take place this upcoming week.

NOTE: The Albuquerque Metro Tournament is a round-robin tournament format. Each team is guaranteed at least three games during their time in the tournament.

In the top half of the bracket, fans find the number-one seed Cleveland Storm, who will match up with the 16th-seeded Cibola Cougars. Winner and loser of that game will face off with the winner and loser of the eight vs. nine matchup, which features the Manzano Monarchs and the La Cueva Bears.

The Storm enter this tournament fresh off of an 11 win campaign out of 12 games, their only loss being against Santa Fe. As for Cibola, it has been a rough patch of games for them so far, only picking up one win out of eight games this season. An upset in this game, especially against Cleveland, would be all the confidence-boost the Cougars would need heading into district play after the tournament. As for the eight vs. nine contest, La Cueva’s slow start is now in their rear-view mirror despite a loss to Atrisco Heritage this past Friday, while Manzano is looking to keep their three-game winning streak alive in the Metro Tournament.

Below those two games in the boy’s bracket first features a showdown between the fifth-seeded Rio Rancho Rams and 12th-seeded Highland Hornets, followed by a clash between the fourth-seeded, defending Class 6A state champions, Atrisco Heritage Jaguars, taking on the 13th-seeded Sandia Matadors.

Rio Rancho will look to keep their winning streak alive that has lasted since December 27th, while Highland, who is still awaiting the renovation of their gym and hasn’t played a single home game yet, are looking to keep a two-game winning streak against Farmington and Piedra Vista. On the other side, the defending champion Jaguars, are coming off of their win against La Cueva to avenge their loss against Eldorado, while Sandia, who’s sitting with an even 4-4 record right now, currently hold on to a two-game winning streak over Cibola and West Mesa, two wins they picked up before the Winter Break.

The third-seeded Eldorado Eagles headline the next quarter of the bracket, as they’ll face off with the 14th-seeded Albuquerque High Bulldogs. This game is matched up with the six vs. 11 matchup, which will feature the Hope Christian Huskies and the Valley Vikings.

Heading into this first round contest, the Eagles will look to bounce back from a two-point loss to Volcano Vista they suffered before heading into the Winter Break, while Ron Garcia and his Albuquerque High Bulldogs still look to secure their first win of the season. Hope Christian, fresh off of their Rio Rancho Tournament campaign, unfortunately ending with a tournament championship game loss, will take on Valley, who has not played since December 21st.

In the final portion of the bracket, the seventh-seeded Del Norte Knights will take on the 10th-seeded West Mesa Mustangs, while the second-seeded Volcano Vista Hawks faces the 15th-seeded Rio Grande Ravens.

Del Norte will look to get off of their two-game losing streak to Rio Grande and Volcano Vista, while West Mesa is coming off of a 2-1 campaign at the Hobbs Holiday Hoopla Tournament, securing wins over Shiprock and Andress out of El Paso, TX. Volcano Vista will look to continue a winning streak that has lasted since December 12th, while Rio Grande, on the other hand, is coming off of a win against Deming on December 29th.