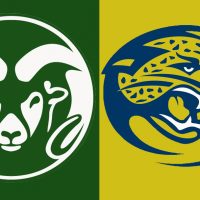 101.7 The Team returns to high school basketball action this Thursday night as district play begins all across the state. To kick off our coverage of district play, District 1, Class 5A will be in the spotlight, when the Rio Rancho Rams pay a visit to the Atrisco Heritage Jaguars in Albuquerque.

Rio Rancho enters this contest capping off their non-district competition with a win against West Mesa on Tuesday night, 88-61. This got Rio Rancho back on the winning track after a bad loss against La Cueva last Thursday. This will be the second of three games that Rio Rancho will play against Atrisco Heritage after the two met in the Metro Tournament quarterfinals. “I think being 13-4 (to start the season) is a little surprising because we lost two players at the beginning of the year,” said Rams head coach Wally Salata. “One thing that we kind of stress, is you play four quarters of basketball, and we try to tell our players, our goal is to win three of the four quarters each game, and against La Cueva, we only won one quarter. And when you only win one quarter, you’re not going to win that many basketball games.”

The name to watch all season long for the Rams has been David Patterson, as he averages 26.5 points per game with a 50% field-goal shooting percentage, along with an 83% percentage from the free-throw line this season. Considering that the Rams average 76.8 points per game this season, Patterson makes up for a considerable amount of those points. Blaine Gallegos, who many know for being on Rio Rancho’s football team as well, trails behind Patterson in points per game, averaging 16.8. Even though Patterson and Gallegos are the two main players in the spotlight for Rio Rancho, Coach Salata says they have many contributors ready to pitch in.

Speaking of Coach Salata, he knows that they will have to contain Joziah Ramos in order to take out the Jaguars on Thursday night. “I look at personnel, to see what kind of personnel the opposing team has, and I think it was good for us to see… Ramos, who is their best player, he hurt us for 35 (points) the last time we played them,” Salata added. “I just think that if we don’t do a better job of containing Ramos, he can have another big game against us.”

On the other side of the court, Atrisco Heritage will open up district play the day before this contest as they take on Cibola. They also recently capped off non-district play with a win against Rio Grande on Saturday by a score of 70-43.

The biggest keys for Atrisco Heritage heading into this matchup is to get Ramos involved early and often and make sure that they find their shooting groove as quickly as possible so that they have a better chance at a lopsided win against Rio Rancho.

Pregame will begin at 6:30 pm from Atrisco Heritage Academy after the conclusion of the Jim Villanucci Show. Scott Galetti and Brian O’Neill will have your call.