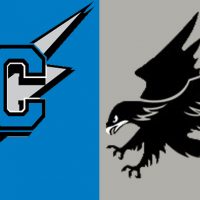 As we get into the thick of things in New Mexico high school basketball district play, 101.7 The Team brings you coverage of a crucial District 1/5A showdown coming up on Thursday night. This week, we venture out to Volcano Vista High School, where the Hawks will host the Cleveland Storm.

The regarded number-one team in New Mexico’s Class 5A rankings has struggled with their district so far this season, as the Storm just secured their first win in district last Thursday against the Cibola Cougars. While also dropping a contest to Atrisco Heritage, the Storm will look to avenge their loss to Volcano Vista at home that opened up district play for them by a score of 58-57. The Storm also won tremendously against their rival Rio Rancho on Tuesday, 90-68. “Our boys have been playing hard all year. On the defensive end and the rebounding end, we really brought it (Tuesday night),” said Storm head coach Sean Jimenez. “I think when our team brings that much energy on the defensive end, that’s what really helped us was our energy and effort.”

Serving as the dynamic duo for the Storm are seniors Jalen Munn and Aamer Muhammad, with Munn currently leading the team in scoring, averaging around 15.2 points a game, with Muhammad right behind him, averaging about 15.1 points a game. The big man Josh Tarry is right behind Munn and Muhammad in scoring, averaging 11.2 points per game. Munn also leads the team in rebounding with 6.1 a game. “Those two really lead us and everything. … These guys know how to win, and that is a skill that is very hard to teach,” Jimenez added about his dynamic duo. “But they understand that it takes a team to win and that’s what’s so special about those guys.”

Entering this contest, Cleveland will look to improve on things that they found in their previous matchup with Volcano Vista, which was to dictate the tempo. “We gotta dictate the tempo. They’re going to want to play a slower-pace game in the 40’s and 50’s. We gotta make it up and down game in the 70’s and 80’s, and make them play our style of basketball,” Coach Jimenez had to say about the keys.

Speaking of Volcano Vista, they were looking to bounce back from a loss last Thursday against Rio Rancho, which they succeeded in doing when they won against Atrisco Heritage on Tuesday by a score of 54-46. Because of Rio Rancho’s loss to Cleveland this week, that means Volcano Vista and the Rams tie for the top spot in District 1/5A currently. “It’s important to take care of your home court, however, (that) does not mean that a team like Cleveland, who’s had a couple of tough losses at home, is out of the race,” Volcano Vista head coach Greg Brown said. “Every night, you have to be prepared. … it doesn’t matter who it is. It doesn’t really matter where it is. It really matters about how your team is locked in…”

Speaking of being locked in, Coach Brown will look to see his key players locked in for this matchup, which includes names like Jalontae Gray, Jake Deatherage, and Dion Battle, who average 10 points per game each. Right behind them is Cesar Madrid, who currently averages 9.6 a game as well. Jacob Aragon and Ben Manzano will also work themselves into the scoring column, as each of them average eight points per game.

Coach Brown believes that they must defend well and play well in order to beat the Storm for the second time in district play. “We know that we have a tough test ahead of us with Cleveland. We’ve got to make sure that we defend them well, that’s what it always has come down to with Cleveland is that we gotta be able to defend them,” added Brown. “Whenever we struggle with Cleveland, it’s because we get caught up in some quick shots.”

The pregame show for this contest will begin at 6:30 pm with Scott Galetti and Brian O’Neill on the call for the contest. Before the game, be sure to tune into the Jim Villanucci Show at 4:00 pm.