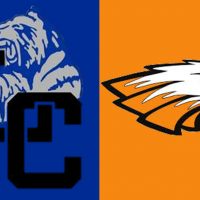 101.7 The Team’s coverage of high school basketball returns this Friday night with a well-known rivalry matchup in the state of New Mexico that always brings excitement, no matter the sport. For that rivalry matchup, we bring you out to Eldorado High School, when the Eagles host their rival, the La Cueva Bears.

The Bears, who remained undefeated in district play with a win over Farmington on Saturday, have started to find their stride as a team in the latter portion of this season. Despite a setback non-district loss to Highland in the middle of district play, the Bears have ripped through their district opponents, which has included a sweep of Farmington, and an earlier victory on La Cueva’s home court against Eldorado, the score being 69-68. La Cueva also enters this contest riding a four-game winning streak. “I think we’ve really improved from the beginning of the season. There was one point that MaxPreps, before our district started, (said) that we had the toughest schedule in the state,” said Bears head coach, Frank Castillo. “Now that has kind of fallen a bit since the start of district, but I think that prepared us for district. It was so rough early on us that we had to get experience, we had to grow, and we finally did grow, and I think that really helped us.”

The junior standout, Derek Aeilts, continues to lead the way for La Cueva in terms of scoring, averaging around 20 points a game, along with seven rebounds a game, making him the second-leading rebounder for the Bears. The tall forward, Isaiah Ortega, is right behind him in points averaging 10 points a game, along with leading the team in rebounds averaging 9.5 a game. Speaking of 9.5, that’s how many points their lead guard, Zach Garcia, averages. “Derek is a scorer. He can shoot, he can finish around the basket. … Isaiah is just a beast inside, with his scoring ability around the basket, but his rebounding is phenomenal. … And Zach (Garcia), he probably does his best when he’s driving to the basket,” Castillo added.

In their first meeting with Eldorado at home, the Bears were able to sneak out that big win thanks to double-figure performances from Aeilts and Garcia, along with 47% total field-goal percentage from the entire team. La Cueva will look to repeat more of the same in this matchup. “There’s a lot of things that we have to stop (against Eldorado), they’re so good. They’ve got that really good one-two punch, (Tyler) Quintana and (Kameron) Valencia,” Castillo added. “When it comes down to it, it’s about us making plays and them making plays, both on a defensive and offensive side. I don’t know if we’ll really prepare for it any differently than any other game we play, but since we’ve played them, we have a lot of film, so there’s a lot of things to look at.”

On the other side of the court, Eldorado will be looking to avenge their loss against La Cueva from earlier on in the season, which is currently their lone district loss this season. Before they take on La Cueva on Friday, Eldorado won against both Piedra Vista on Saturday, 77-49, and Farmington on Tuesday, 80-59. “We’re jostling for the district championship. We have a chance to get that loss back, and (are) still looking for the district championship. It’s different for both these schools because they’re after state championships usually, but in front of us is district, so we’re looking forward to it,” Roy Sanchez, Eagles head coach said.

Fans will once again get to see the dynamic duo of Tyler Quintana and Kameron Valencia take the court for the Eagles. Also working into the rotation for the Eagles is Cameron Carter, who has become the sort of, as Brian O’Neill would put it, the third scorer for Eldorado.

The Bears will be in for the tough task of defeating the Eagles at home, as they currently are 6-0 on their home court, and it is senior night on Friday night for the Eagles. “I don’t know if you can contain players like that (Derek Aeilts and Isaiah Ortega), they’re so good, you definitely gotta pay attention to them,” Coach Sanchez said about the keys to the game in this contest. Since it is senior night as well for the Eagles, Coach Sanchez added, “Thanks for all your dedication and hard work towards the program. It’s been a great four years. We never can replace guys like that. I’m glad they were proud to represent Eldorado in a positive way.”

The pregame show for this contest will begin at 6:30 pm after the conclusion of the Jim Villanucci Show. Scott Galetti and Brian O’Neill will have the call for you.