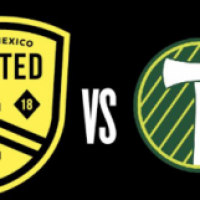 12,921 passionate, screaming fans rejoiced as Kevaughn Frater put New Mexico United (3-1-5) back level with the visiting Portland Timbers 2 (4-1-3) mere moments before the match ended. The club-record setting crowd had plenty to cheer for and some of them, at one point, let that passion get the better of them.

Back home after a heartbreaking loss to Reno 1868 FC, United certainly started the match off on the right foot. Coach Troy Lesesne’s squad came out in a 4-4-1-1 with a slightly changed lineup from the previous match. Kenny Akamatsu was tapped for his first career start and played across from Santi Moar, giving United another option to try and open up the field. In under two minutes, Moar and Chris Wehan connected for an attempt on goal that was deflected. Minutes later, Moar would go down in the box and appeals for a penalty were waved off by the referee.

There was a brief stoppage in the 34th after Portland defender Adrian Diz Pe and Frater collided while attempting to play a header. Portland Coach Cameron Knowles made the hard decision to make a change in the first half, taking off Diz Pe and bringing on Max Ornstil. For a time, both clubs looked poised to open the scoring with several shots. Portland, though, was shut down by the New Mexico press. Even with United’s dominance throughout the first half, they were unable to find the back of the net.

The stat line backed up this sentiment. With 60% possession, nine shots and no shots on target allowed, United showed they were here to make an undeniable statement in the match. Coming out of the half, Portland had a brief period of possession, but the United press quickly took over. After winning a free kick in the 50th, the resulting kick was played into the box. Wehan laid off a header to Frater whose right footed shot, nutmegged Timbers keeper Jake Leeker and found home.

The recently subbed on Ornstil would find himself on the end of a handball call in the 54th. Off of a throw-in from Josh Suggs, Frater would go down in the box, but at the same time, the Portland defender appeared to lunge for the ball with an outstretched arm. Frater would slot home the resulting penalty kick with a powerful left footed shot, putting the home side up 2-0.

United looked to have the match well in hand, but Portland would come storming back. Following a sequence of fantastic saves by Cody Mizell, Christian Ojeda would lift a corner that found an unmarked Eryk Williamson, who was one of our Players to watch this week, in the 66th minute. His leaping header would float past Mizell into the upper right corner, putting the visitors back within striking distance. Two minutes later Timbers sub Ryan Sierakowksi would also find home. Striking the ball from around 21 yards, his shot would take a deflection off United defender Sam Hamilton and find its way into the side netting, leveling the score 2-2.

“I don’t think I’ve ever seen quite a goal like that,” said Lesesne. “Us going in, making a good tackle and the ball deflecting 20 yards from goal and into the side netting. It was something I’ve never experienced before.”

The second questionable handball of the night, and second in two weeks, went against United. In the 75th, Foster Langsdorf sent in a shot from the left side of the box that went off a spinning Manny Padilla. Padilla’s arms were inside his body and in a natural position, yet the referee called for a penalty. Williamson would take the shot to the left of Mizell who guessed the wrong direction and the visitors would take the lead 3-2.

Williamson then decided to taunt the United supporters section. The fans emotions boiled over at this point with several items and drinks being thrown on the field.

“First of all, I think we have the best fans in the league,” said Mizell, who stepped between the stands and the Timbers forward. “This game was very emotional, and you can tell it means a lot to this state and these people. It means a lot to us too. We have to hold our emotions in the right way as players, and they do as fans too.”

The announcer in the stadium had to address the issue over the PA system, stating that anyone throwing items on the field would be ejected. The actions of the supporters section also prompted a response from the President of The Curse, David Carl. In an open letter put on out Twitter, he addressed the situation.

“What has no place in soccer is the reaction we saw from some supporters this evening. We, as a supporters group, as a club, and as a state have made incredible strides since announcing this club less than a year ago,” he stated. ”

Carl went on to say, “while I believe that no members of The Curse were responsible for throwing trash, beer and food on the pitch, I believe that we – The Curse and every supporter – share a responsibility to not allow the countless hours that unnumbered people have put into this club to go to waste.”

After the goal, the club huddled together around the 18-yard box for a quick meeting.

“We were all probably a bit frustrated [at that point],” said Chris Wehan. “We knew that was a really big moment of adversity for us, and we’re going to face plenty of times throughout the year. It was good for us to come together and have the belief that we can get back into this game.”

As stoppage-time wound down, United found themselves on the attack again. On the third of three consecutive corners for United, the Portland defense was unable to clear the ball, which ultimately landed at the feet of none other than Frater. On a volley, Frater one-timed the ball with a left-footed screamer over a leaping Leeker and into the top netting. After being the victims of a last minute goal against Reno, United answered in kind to Portland.

“Portland disrupted our midfield play at times in the second half,” Lesesne said. “Now, we have some flexibility with everyone fit and able to rotate in. There are plenty of positives from tonight. We feel like we let an opportunity go tonight.”

In his first career start tonight, Akamatsu put in an impressive shift. “I was thrilled for Kenny tonight,” said Lesesne. “He’s been extremely patient through the process of getting a visa. Clearly, he’s a good 1v1 player, and I think he’s going to be very dangerous for us in this league.” With some incredible footwork and a great work rate, Kenny was able to get three shots off tonight in 74 minutes.

Kevaughn Frater – with three goals there’s no doubt that Frater is the Man of the Match. His decision making and finishing was first class.

Frater’s hattrick put him into a tie for the league lead with 7. Tied with Moar and Tulsa’s Luca Lobo.

United were both awarded and conceded their first penalties of the year.

With the draw, United remain second in the conference, one point behind Portland.

The homestand for United continues on May 5 at 5:30 P.M. as they host San Antonio FC. The club will have festivities as well as a flag giveaway in honor of Cinco de Mayo.