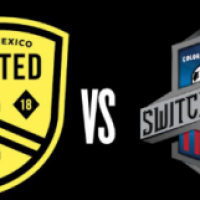 Two league matches into their latest road trip New Mexico United (5-1-6) have already scored five goals and picked up four points out of a possible six. By the rules of the game, road points count the same as points at home. But if you were to ask any coach, they would tell you that picking up points on the road is extremely difficult and are very important. Clubs are expected to win at home not necessarily on the road. That’s why road points are so important.

There was some question about the club’s fitness coming into the match. At the tail end of a grueling stretch with three matches in eight days, could United overcome heavy legs? Many also wondered who would fill in for Santi Moar. The answer to the second was Kenny Akamatsu. The first wouldn’t be answered until after kickoff.

United came out determined and controlled the match from the off. Colorado Springs Switchbacks FC (2-7-2) would manage to put a few shots towards goal, but nowhere close to being a danger in the first 15 minutes. Kevaughn Frater would put United on top in the 18th with his quick reaction to a loose ball. A tackle from Abdul Rwatubyaye on Devon Sandoval near the spot caused the ball to pop out and fell to the feet of Frater. He would make quick work of it putting United on to 0-1.

In recent weeks we’ve seen other clubs have some success using a high press against New Mexico. Tonight there wasn’t much pressure from Switchbacks FC, and United took full advantage of that. United was able to play with more fluidity and had much crisper passing. Throughout the first half, New Mexico had its way. Frater would go on to find another goal of opportunity in the 36th. Josh Suggs made a nice run on the left and would put a shot on target.

Colorado keeper Andre Rawls would make a diving deflection, but the ball once again landed at Frater’s feet, and he was able to put it away. Going into the half up 0-2, the outcome seemed almost inevitable.

In the first half United held 58% possession and put four shots on target. Colorado managed zero shots on target, showing just how dominating United had been.

Because of the movement established by New Mexico in the first half, when Colorado tried to press in the second half, it wasn’t successful. Before the 60th minute, there were a few moments of concern, not because of how Switchbacks FC were playing, but because of potential injuries. In separate incidents, both David Estrada and Frater would go down and take some time to return. Fortunately, neither was serious, and both players were able to continue.

In the 63rd Colorado was able to pull one goal back, making the score 1-2. On a half volley, Alex Molano would take s shot that deflected off of Mike Seth and into the net. Of 21 shots taken by Switchbacks FC on the night only five (including this one) would be on target. The one goal deficit wouldn’t last long though.

In the 74th Kenny Akamatsu would record his first assist with the club. His through ball would find none other than Frater. Frater, who had been playing off the back shoulder of Jordan Schweitzer, would run right past Rawles and bury his shot in the net. Now with a 1-3 lead, United would see out the match without allowing another goal. That’s not to say that Switchbacks didn’t have chances, but the sure hands of Cody Mizell would prevent any of the serious threats from getting past him.

From start to finish, New Mexico United looked and performed like the better club. Coach Troy Lesesne has said it every week, movement is a massive factor in this club’s gameplan, and when they show they can put it all together, they can win any match. With the win, United sit alone atop the Western Conference standings with 21 points. Portland, who is in second, did not play this weekend.

Kevaughn Frater – it’s hard not to pick the hat trick hero. Frater’s reactions to loose balls and his finishing tonight were unparalleled.

As the season progresses more matches within the Four Corners Cup will take place. The Cup is a piece of ‘silverware’ that is being played for by New Mexico, Phoenix Rising, Colorado Springs, and Real Monarchs. This was United’s third match in the Cup competition and currently sits atop the standings with seven points.

Colorado Springs is very good crossing the ball. Tonight however they were held to 14.8% accuracy on attempts.

New Mexico United only took nine shots tonight. Five of those were on target and of those, 60% were converted.

After the win, United will head back home for a few days before going back on the road. Their next match will be on Saturday, May 25th as they take on Austin Bold FC in Austin.