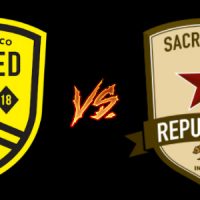 On Saturday night New Mexico United (6-1-7) close out a short homestand against Sacramento Republic FC (5-5-2). United are coming off of a tough draw in their last match against OKC Energy FC. Any time a club can pick up points, it’s a positive, but dropping two points in the manner they did on Wednesday has to sting. The Republic match is an excellent opportunity for United to rebound and pick up a needed three points.

At times this season United has struggled to close out matches and has dropped points on multiple occasions. No club will be perfect, but United know they need to play better in the second half of each match. OKC was able to take advantage of Deshorn Brown being lost track of for only a moment, allowing him to prevent United from winning.

All it takes is one mistake for a match to turn on its head. United has been the side to take advantage of these in the past, but they couldn’t find that magic last time out.

United has the ability to avoid mistakes and has done so for much of the season. Sacramento does present a unique challenge, though. Unlike other clubs United has faced, Sacramento plays very well in transition and likes to counterattack. In recent matches, United has posted 67 and 64.8% possession rates against Colorado Springs and OKC respectively. This was made possible by United cleaning up their passes; getting the right pace on the ball and reading the passing lanes.

Much of this improvement can be attributed to the play of David Estrada and Juan Guzman. Their ability to control the midfield will be a key to the match. While he may not lead in any offensive stat categories, Guzman has been instrumental in United’s success this year.

Guzman is currently sitting on an astonishing 91.8% pass accuracy and 84.2% pass accuracy in the opponent’s half. These two stats paired with his distribution clearly show that Guzman is not only picking out the tight passing lanes but is also creating a tremendous amount of ball movement. That movement pulls opponents out of their shape and opens up space for guys like Santi Moar.

United needs to control the tempo, maintain possession, and control the midfield for their best shot at a win against Sacramento.

The other determining factor will be whether or not United can break down the Sacramento defense and take quality shots.

United currently leads the league in shooting accuracy at 55.38%. But the past two matches have been a bit down for them, only being on target 34.2% of the time. This is in large part due to opposing defenses not allowing good looks, and United need to find a way to stop this trend.

Daniel Bruce could be a key player in helping this stat rebound. In his first career start, he caused problems for Callum Ross and Kyle Hyland. With his movement and ability to play either out wide spreading the defense or cutting inside, Bruce could pull a lot of attention.

Sacramento doesn’t lack for offensive options. Facing off against Cameron Iwasa and Sam Werner, United has a tough task ahead of them. It will fall to Justin Schmidt and Sam Hamilton to contain them and prevent them from getting good looks.

Juan Guzman – One of the best midfielders in the league, his play will play an essential role in this matchup.

Kevaughn Frater – Frater has to be feeling like he got the short end of the stick against OKC. Fouls that weren’t called, fouls that were, and no goals. Frater could be in for a big night.

Like many other USL clubs, Sacramento has struggled on the road this year. With only a 2-4-0 record in those matches, it could be a good sign for United.

Part of the issue for Sacramento is that they have had several injuries to their stars. Villyan Bijev and Cameron Iwasa have both missed time but are both healthy now. The more significant concern for United will be the combination of Iwasa and Werner. They have combined for eight goals, 35 shots, and 37 chances created.

Sacramento hasn’t quite figured out how to have consistent defensive efforts. They are conceding nearly two goals per match on the road, have managed four clean sheets and at the same time have allowed 2 or more goals on five occasions. Only time will tell which version of their defense will show up.

Sam Werner – Werner has been a viable threat for Sacramento with the absences of Iwasa and Bijev early in the season. Whether or not he can continue his run is yet to be seen, but the combination of him and Iwasa is something to watch for.

Villyan Bijev – The 2016 Assists Champion and first team all USL player is returning from an injury, but his ability to contribute shouldn’t be overlooked. Since he joined the USL, he’s registered 23 league goals in 93 appearances.

The match will be streamed live on ESPN+ beginning at 7:30 p.m. (Mountain) on Saturday, June 8. International viewers will be able to watch the match live on YouTube. ESPN+ is viewable online via the ESPN app or across a variety of mobile and connected living room devices, including Amazon’s Fire TV, Apple TV, Chromecast, Roku and more. The match will also be broadcast live on ESPN Radio 101.7 The TEAM and can be streamed on www.1017theteam.com or The Team app.