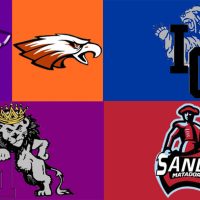 As the 2019 New Mexico high school football season approaches, fans are getting more and more excited for the action this upcoming season. In the second article of a three-part series, ESPN Radio 101.7 The Team will break down District 2 of Class 6A.

Last season, the Clovis Wildcats suffered a rarity, a losing season. A combination of both a tough schedule and a district run that proved to have its challenges made things difficult for the Wildcats, and this season, with a similar schedule approaching, Clovis will be looking to get back on the winning track they are well-known for in their history. Great news for Cal Fullerton and the Wildcats, Chance Harris returns at the quarterback position for his junior season after throwing for 1,548 yards and 14 touchdowns last season. With the departure of DeMarco Fitch at the running back position, Jeston Webskowski takes over the running back duties for the upcoming season. The junior ran for just a mere 92 yards last season when he got touches last season, but those numbers are sure to go up for the upcoming season. Also featured for the upcoming season are the Phillips brothers of Jaden and Malik, with Malik looking to make some moves on the offensive side at wide receiver, while Jaden will be keying in defensively. Once again in their schedule, Clovis will face three teams from Lubbock, Texas, before entering district play. Last season, the Wildcats were swept by those three Texas teams, which they will look to change for this upcoming season. Despite their losing record, Clovis still made the playoffs, and they will look to repeat that, just with a better record.

Safe to say last season was a rollercoaster for the Eldorado Eagles. After starting their non-district campaign strong with a 5-1 record, things quickly fell apart in district play, going 1-3 against the toughest district in Class 6A. Thankfully enough, the Eagles still were able to qualify for the state tournament, able to defeat Hobbs in the first-round play-in games before falling to Centennial in the quarterfinals. Now, they will look to have a similar start to the season that they had last year, just without the skid experienced in district play. Nick Petty will return for his second season leading the Eldorado offense after he filled in for the majority of the season when senior quarterback, Gabe Smith, suffered a hindering injury. With Petty only being a junior for this upcoming year, he can quickly become a three-year quarterback for the Eagles that could make lots of impact for years to come. Also returning is running back Ben West, who rushed for around 500 yards last season, and will look to make things happen once again in the running game for Eldorado. The two primary receivers that the Eagles will have to look forward to is Zack Hofman and Broderick Dickman, who both got catches this past season. On the defensive side of the ball, one of Eldorado’s key pieces is defensive tackle, Keith Alvarado, returns for his senior season, and he’ll be joined by Joey Burke at the other defensive tackle spot to anchor the defensive front line for the Eagles. Elijah Goree will be the leader in the backfield at the cornerback spot and will look to provide some coverage for the Eldorado pass coverage. Headlining Eldorado’s non-district portion of their schedule will be Las Cruces and Class 6A runners-up, Cleveland, followed by the same district that gave them trouble last season.

The defending state champion La Cueva Bears have a lot of high expectations heading into this upcoming season, as the offseason has proven to be one filled with excitement. With star wide receiver Connor O’Toole receiving 16 Division 1 football offers, along with other members gaining national exposure, the Bears have a lot to look forward to this upcoming season. Not everything will come easy to them though, as they will have to fill many holes of graduated seniors on the defensive side, six of their 11 starters from last season to be exact. But nonetheless, the talent the Bears have to look forward to is promising. Thankfully for them, one of last year’s leading tacklers, linebacker Noah Woisin, will return after picking up 39 tackles on the year. Austin Smith takes over the quarterback duties fully for La Cueva after serving a major backup role the past two seasons, which will greatly help the Bears get veteran experience on their side. Over the course of last season filling that backup role, Smith threw for 426 yards and five touchdowns. Safe to say that La Cueva will once again be gunning for that state title, and they have the talent to do so. They will seek their second back-to-back football state championships in school history.

Safe to say making the playoffs in Phillip Martinez’s first season as head coach is precisely what the Manzano Monarchs were looking for last season, and now for this upcoming season, they will look to build upon that with a fresh new group taking the field. With the departure of long-time quarterback, Dakota Powell, Jace Melfi now gets his shot at leading the offense, which might prove to be a good price, as Melfi has lots of experience at the varsity level. The younger brother of Manzano standout, Andrew Erickson, Austin Erickson, will also make his return to the field for the upcoming season, which means that Manzano will also have some experience in the passing game that they could bring out throughout the course of the season. Isaiah Hernandez, a 5’6” senior, will take over the running duties for the now-departed Xavier Ivey-Saud. Defensively, the Monarchs will look to a senior core to bring them some key moments this upcoming season, which include linebacker Stone Davis, who led Manzano in total tackles last season with 67 total. The Monarchs are looking to make another run in the playoffs this upcoming season, and with lots of seniors on the squad, they have another great chance of doing so.

Chad Adcox is back in the coaching game for the upcoming season after taking a year off, taking over a Sandia Matador program that is looking for some new hope. Thankfully for Adcox and the Matadors, the majority of their offensive core will return for the upcoming season with gained experience. Among those returning include quarterback Junior Silva and running back Le’Shawn Joseph. Last season, Silva threw for 1,279 yards and eight touchdowns, while Joseph rushed for 915 yards and 11 touchdowns. Joseph was a running back that flew under the radar last season with the presence of both Dorian Lewis and D’Andre Williams, but it is likely he will really make a name for himself in this upcoming season. A young linebacking core will lead the way on defense for Sandia, who will look to improve on what they produced last season, where they allowed an average 33.1 points per game to their opponents. If the pieces can be put together for this upcoming season, the Matadors will improve on their two-win season a year ago.