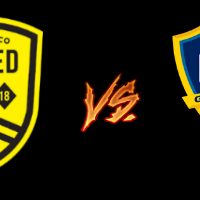 Every week in the USL presents a new challenge. New Mexico United (8-6-9) has risen time and time again to face those challenges. While they haven’t always gotten the better of their opponents, they have learned from every one of them.
Now it comes down to which club wants it more. It comes down to which clubs can put together enough results to give themselves a leg up in the race for the playoffs. According to 538’s soccer predictions, there are currently ten clubs with a greater than 50% chance to make the playoffs.

United is still considered one of the favorites to make the cut, currently sitting at a 90% chance in their ratings. Anyone that follows power rankings for any sport knows that they’re in constant flux and very dependent on results.
That being said, United has to continue to prove that they belong. The next step in that process is to take care of business against LA Galaxy II (8-8-8) this weekend at The Lab.

United have dealt with suspensions during the season, but this will be the first time that they’ve had to deal with multiple ones at the same time. The club will be without the services of Josh Suggs and Manny Padilla, both of whom earned suspensions during the match with Portland. Although United have been without both for a time earlier in the season, it could be argued that this is a worse time to not have them available.

Austin Yearwood and Ethen Sampson are expected to step in for them this week giving United the same look they employed during Suggs’ injury. While both players are talented in their own right, Suggs has been instrumental in much of United’s success. His link-up play with Santi Moar has opened up the attack on many occasions, and the duo has been deadly when on the pitch together. Yearwood should line up in a similar position to what Suggs usually plays and will work to create the same openings with Moar.
The play between the two will also help dictate what happens on the night for Kevaughn Frater and Chris Wehan. The two have been lethal of late and have a chance to make a significant impact against a Los Dos backline that has struggled throughout the season. Wehan especially has found a new level of confidence and has been causing havoc inside opposing clubs final third. Ball movement in and around the box will be essential to unlocking the Galaxy defense.

Players to Watch
Kevaughn Frater – Kevaughn has been one of the fiercest players on the pitch for United all season long. At times it’s been a positive for the club, and at others, it’s cost them, with Kevaughn serving multiple suspensions already this year. He can be passionate and a spark for United, but he has to keep his temperament from boiling over. Against Los Dos and their struggles to defend, he could be in for a big night at The Lab.
Chris Wehan – His decisiveness and ability to pick his spots has helped United regain some of their form during recent matches. He could play an essential role in creating space and chances for not only himself but Moar and Frater as well.
New Mexico United Team Leaders
Goals: Frater (13)
Chances Created: Wehan (39)
For the visitors, they still have questions that need to be answered despite their recent uptick in form. Victims of a porous defense and questionable goalkeeping, they haven’t had the season they were hoping for. Some of the questions that still linger are the result of the loans from their MLS counterparts. With players moving in and out of the roster, it’s hard to find consistency in their level of play.
Despite the roster changes, Ethan Zubak has been a standout for the USL club. Across his dozen appearances with Galaxy II, he’s become their second-highest scorer. He’s proven that he can finish against USL level competition but hasn’t found the same success in the MLS. He’s a threat at all times and will be a test of skill for Yearwood and Justin Schmidt. The play of the two United defenders will be the biggest key in the defensive third.
Galaxy II has been one of the worst defenses in the league this season. Having allowed 47 goals on the campaign, they haven’t come close to finding a solution. That could prove to be a big problem for Los Dos as they face off against two of the league’s top scorers in Frater and Moar.
Players to Watch
Ethan Zubak – As discussed above, Zubak is a threat night in and night out. Against a depleted United defense he will be a handful and could possibly find his way onto the score sheet.
Brian Iloski – The first time the two clubs faced off, Los Dos played a lot of crosses into dangerous areas in the final third. Iloski has been a pest in every match that he’s been a part of. With 41 chances created in only 12 appearances, he could prove to be a danger throughout the match.
LA Galaxy 2 Team Leaders
Goals: Kai Koreniuk (6)
Chances Created: Brian Iloski (41)
The match will be streamed live on ESPN+ beginning at 7:30 p.m. (Mountain) on Saturday, August 17. International viewers will be able to watch the match live on YouTube. The match will also be broadcast live locally on ESPN Radio 101.7 The TEAM and via The TEAM app.