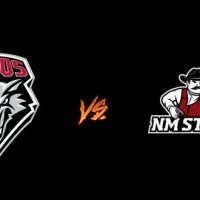 The Rio Grande rivals will play its 110 match – giving the Lobos a 73-33-5 edge. Though in the last three years the Aggies have won two out of three.

Assistant Saga Tuitele will remain the acting head coach for a second consecutive game – as Bob Davie continues to recover from a “serious medical incident” endured after a victory over Sam Houston State.

During a media luncheon held on Tuesday, Davie expressed hope to return full-time next week as the team prepares to face Liberty on 9/28.

Davie announced to the press that redshirt sophomore quarterback Tevaka Tuioti would start against the Aggies. Tuioti went 6-for-13 for 132 yards against the Fighting Irish in the second half.

In just three games into the season, UNM will have started three different quarterbacks, earning itself a milestone in Lobo football history.

With Tuioti earning the starting position, his performance could potentially dictate who the frontman will be for the remainder of the season – unless Davie and his coaching staff have a hidden agenda.

A notable player for the Aggies is quarterback Josh Adkins, who went 19-for-30 for 145 yards during his performance against Alabama.

The game kicks off at 2:30 p.m. (MST) at DreamStyle Stadium. Live coverage on AT&T SportsNet.