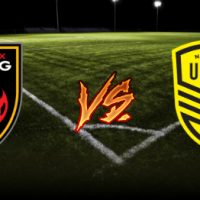 With the Four Corners Cup on the line, New Mexico United played host to Western Conference rivals Phoenix Rising FC at The Lab on Saturday night.

Before the match, the club knew that they would be without the services of winger Santi Moar, who was serving a one-match suspension due to yellow card accumulation. An hour before kickoff, the roster came out, and among other changes on the teamsheet, one name was absent; Cody Mizell.

Mizell, who had been dealing with a foot injury was left off of the team sheet, opening the door for reserve goalkeeper Ben Beaury to see his first competitive action of the season. Beaury had previously played against Cardiff City FC when they visited Albuquerque in July. United also signed another keeper to a short term deal, current First Assistant Coach and Director of Goalkeeping, as well as former Lobo, Mike Graczyk.
It wouldn’t take long for the scoresheet to flip from zeroes. In the fourth, Manny Padilla would play a cross from the right-wing towards Devon Sandoval making a run into the box. Just outside the six-yard box, Sandoval would connect with his left foot and send the ball flying past Rising goalkeeper Zac Lubin to stake United to an early 1-0 lead.

Another Padilla cross in the 11th nearly doubled the United lead. Although the cross wouldn’t initially find anyone else from United, Rising defender Mustapha Dumbuya would misplay the ball and leave it at the feet of Josh Suggs. Suggs would get too much under the ball and send it sailing over the goal.

United would control the pace of play for much of the first quarter-hour of the match, with Rising only able to pressure reserve goalkeeper Ben Beaury during their first corner of the night. United was able to easily clear each of the first two corner attempts from Rising FC.
Rising forward Solomon Asante finally found himself a chance just before the half-hour mark. In transition, Asante and Adam Jahn both found room to operate in the final third and Asante would try from outside the area. His shot would go wide right, however, and hit the outside of the net.

As expected, the match was physical from the opening whistle. Players on both sides were giving it their all, with bodies going down multiple times throughout the half. Even with all the physical play, somehow there were only two yellow cards given out; one to Kevaughn Frater and one to Jahn.

After dominating the early possession, United conceded some back to Rising FC as the half came to a close. Rising FC had begun to find their way into the match and was building momentum despite not being able to find the goal in seven attempts.

Rising FC would get the second-half underway and looked dangerous from the whistle. After a dive by Asante, and a yellow was shown to Sam Hamilton, fired up the crowd United came roaring back to life. A corner kick for United in the 53rd minute would open up the door for them to strike again.

As is customary for United, Chris Wehan would take the corner and deliver the ball towards the back post. Lubin would make a leaping attempt to punch the ball away but was unable to make contact allowing the ball to fall to Justin Schmidt. Schmidt, unmarked, would find the finisher and pushing the lead to 2-0.

The ever-dangerous Rising FC side would get one of their best looks of the night, to this point, only minutes later after Manny Padilla fouled Junior Flemmings on the edge of the box. Asante would be given the nod to take the attempt, but his shot would sail well over the bar.
Rising FC would get several looks and increase their share of the possession the later the match went. No matter what they threw at United though, the play of Schmidt and Rashid Tetteh kept the visitors at bay.

The match wasn’t over yet though, and until that final whistle, Rising FC always has a chance. In the 74th Joey Calistri would take an improbable shot from a yard shy of the goal line and just inside the eighteen-yard box. Miraculously for Rising FC the ball flew across the face of the goal and snuck just inside the far post to cut the lead in half.

Minutes later, Wehan would make his second driving run towards the box in a handful of minutes looking to put the lead back to two goals. With only Rising defender AJ Cochran between him and the keeper, Wehan would take his shot only to have it blocked again.
As time wound down in regulation, Rising FC was desperately looking to find an equalizer. Off of a corner, both Flemmings and Asante would put shots off the bar, inches away from pulling level. After Asante’s shot rebounded, Tetteh would head the ball clear, but only as far as Calistri outside the box. The second-half sub’s leg would be magic once again for the visitors as he would find the bottom left corner to earn the visitors a point.

While many had written off this match as a definite loss for United, there are lots of positives the club can take away from it. Schmidt and Tetteh put on a performance that supporters could have only dreamt of. The duo kept Jahn and Asante from finding the net, which is something that few clubs have managed to do this season.

Player of the Match
Justin Schmidt and Rashid Tetteh – With the unenviable task of trying to contain two of the league’s most dangerous goalscorers, the United centerbacks combined for 15 clearances, one tackle, one block, and one interception. Schmidt also contributed in the attack, adding his second goal of the season.

Four Corners Cup
The result doesn’t eliminate United from contention for the inaugural Cup competition. They will need some help from Real Monarchs SLC in two weeks when they will take on Phoenix as well. If that match ends in a draw, then United will finish atop the standings, but any other result would crown either Real or Phoenix for 2019.

Up Next
The homestand for United will conclude with a Saturday night tie with Rio Grande Valley FC. The first time the clubs met, the match ended in a 0-0 draw. As the season nears its end, United has a chance to pick up points against four clubs that currently sit below them in the standings. That match will kick off at 7:30 p.m. on Saturday, October 5.