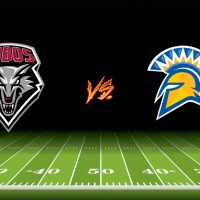 After falling short of a touchdown against Liberty at Williams Stadium in Lynchburg, Virginia, the University of New Mexico Lobos are now 2-2 on the season. For the fourth straight match, the Lobos will play in a time zone that is a two-hour minimum difference than the previous game as they set the GPS to sunny side California to take on San Jose State (2-2).

After coming off a career-high and recording setting game against Rio Grande Rival NMSU, quarterback Tevaka Tuioti struggled at Williams Stadium as he threw 12-for-26 for 139 yards, a touchdown, two interceptions and was sacked twice.

While UNM allowed Liberty’s Stephen Calvert to throw for 306 passing yards, the defense managed to hold the Flames to its lowest passing total of the season – including lowest yards per attempt. The Lobos came up short twice in the end zone as one of the plays resulted in an interception thrown by Tuioti.

It is UNM’s first trip to CEFCU Stadium under the current monumental 40 million dollar renovation, as the East stands have been removed. The project will fund and support the Spartans’ men’s and women’s soccer programs.

Head Coach Bob Davie mentioned during the weekly media press conference that the teams’ defense has improved, while the majority of the athletes on the field being young players.

The game kicks off on Friday night, October 4, at 8:02 pm Mountain Time on CBS Sports Network.