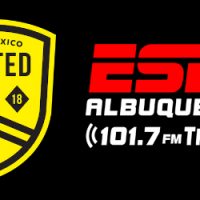 The calendar changing to October has brought a chill to Albuquerque. It’s also brought the annual Balloon Fiesta to town and has some wondering if it will affect the size of the crowd out at The Lab tonight.

All summer long New Mexico United (10-9-11) has been the hottest ticket in town, giving the club the highest average attendance in the USL this season. Last week though, in what was arguably the biggest match of the season so far, the club pulled in just over 13,000. With an event as big as the Balloon Fiesta occurring when a lower club comes to town, there could be another dip in attendance. Both the players and coach Troy Lesesne have said how important the crowds are and how the club draws off of their energy.

The club’s energy level tonight against Rio Grande Valley FC (9-15-7) will be one of the biggest factors in whether or not United can earn a much needed three points. Heading into play, United sits 11th in the table and outside of the playoffs. With their final four opponents all sitting below them in the standings, United should be favored in each of the matches. The club knows that they have to capitalize on the chances they get and not let the moment become too big for them.

United is the more talented of the two clubs on the pitch tonight and will look to get off to an early start once again. Devon Sandoval got the club off to a fast start last week against Phoenix Rising FC and will try to do the same this week. Sandoval has been leading the charge the past few weeks with Lesesne managing the yellow card situation of Kevaughn Frater. The increased playtime and service that Sandoval has received gives clubs one more thing they have to try and game plan for. His play has also garnered him a nomination for the USL player of the month.
The question for United will be whether or not they can make enough stops defensively. Last week against Rising FC they were able to prevent Solomon Asante and Adam Jahn from getting on the scoresheet, but still weren’t able to maintain a two-goal lead. Ben Beaury performed admirably in an emergency start after Cody Mizell was ruled out with a foot injury. Rising FC benefitted from some luck and was able to earn themselves a draw. United will face an RGV attack that has performed well in recent weeks and need to show that they can contain an opponent.

Players to Watch
Devon Sandoval – After scoring six goals in September, Sandoval will look to continue his hot streak. He’s been on the receiving end of several fantastic crosses from Manny Padilla and has been instrumental in the club’s success of late. With Frater possibly having his time managed again, Sandoval could heavily feature in the attack as United look to secure a spot in the playoffs.

Santi Moar – Two weeks ago, Moar finally found himself back on the scoresheet and after serving a suspension against Rising FC, will rejoin the United attack. Moar will play a vital role in helping to open up space from the wing and pulling attention from Sandoval.

New Mexico United Team Leaders
Goals: Frater (14)
Chances Created: Chris Wehan (54)
Much like United, Rio Grande Valley FC has been fighting for their playoff lives. Two wins in two matches have continued to keep their hopes alive by the slimmest of margins. Despite sitting 15th in the table, the Toros past two matches have shown that they are still a threat to the clubs above them. With five goals in those two matches, RGV shocked many around the league. Both of those wins though, happened at their home park.

This week they have to come to Albuquerque, a place where United plays very well. RGV, on the other hand, does not play well on the road. With only one win in fifteen road matches, a trip to Albuquerque at this point does not bode well for the Toros.

Isidro Martinez – RGV’s leader in chances created and assists, Martinez has shown to be a threat all season long. United will have to account for his whereabouts on the pitch. Martinez will be looking to push the pace against the United defense and create chances for Michael Salazar.
Nicolas Corti – The Toros keeper has been inconsistent this season, allowing 28 goals in 16 appearances. While he’s their clear number one, he hasn’t always performed up to that level. He needs to have a solid night against a formidable attack for RGV to have any hope of winning.

Rio Grande Valley FC Team Leaders
Goals: Michael Salazar (10)
Chances Created: Isidro Martinez (62)
The match will be streamed live on ESPN+ beginning at 7:30 p.m. (Mountain) on Saturday, October 5. International viewers will be able to watch the match live on YouTube. ESPN+ is viewable online via the ESPN app or across a variety of mobile and connected living room devices, including Amazon’s Fire TV, Apple TV, Chromecast, Roku and more. The match will also be broadcast live on ESPN Radio 101.7 The TEAM and via The TEAM App as well as Estrella TV 7.2.