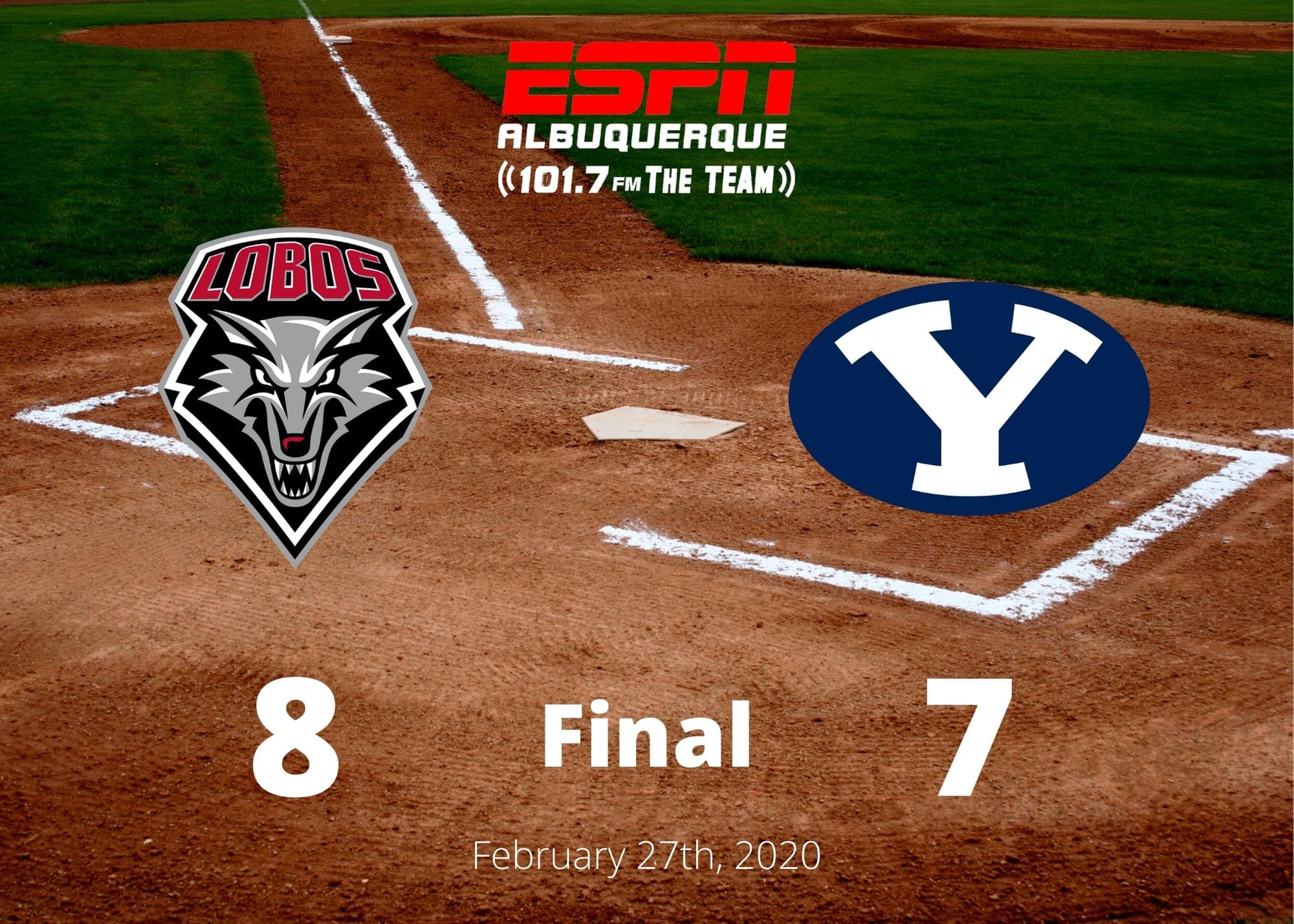 Lance Russell drove in Adam Schneider in the bottom of the ninth inning to give the Lobos a walk-off win over the visiting BYU Cougars in game one of a four-game series at Santa Ana Star Field.

It was a dramatic ending to a game that had the appearance of an easy win for the Lobos, with starting pitcher Aaron Makil cruising with six shutout innings of work and UNM enjoying a six to zero advantage.

The Cougars bounced back with six runs of their own in the top of the seventh frame, highlighted by a two-run double by designated hitter Hobbs Nyberg. Makil’s excellent start turned sour quickly, with the junior from Scottsdale, Arizona finishing the day with four runs allowed (two earned), with six hits and eight strikeouts.

UNM would respond well to the crooked number posted by BYU in the sixth frame with a run of their own in the bottom of the inning to regain the lead at 7-6. Shortstop Kemuel Thomas-Rivera singled to centerfield on the first pitch of his at-bat, plating left fielder Harry Fullerton.

The two teams would exchange a scoreless eighth inning before more fireworks were made in the final frame.

Closer Payton Strambler pitched a solid eighth inning, only to give up a game-tying single to catcher Joshua Cowden in the top on the ninth.

Justin Watari got things started for the Lobos with a one-out single between the shortstop and second baseman to put the winning run on first. The speedy Schneider pinch ran for Watari and quickly stole second base to get into scoring position.

First baseman Kyle Landers, who was at the center of some chirping between the two teams when they played against each other in Surprise, Arizona last week, failed to drive in Schneider after flying out to right field,

BYU manager Mike Littlewood rolled the dice by putting the winning run just 90 feet away with intentional walks to both Kyler Castillo and Conner Mang, leaving it up to catcher Shane Podsednik, who was struggling at the dish with an 0-for-5 day, including the golden sombrero of four strikeouts.

UNM manager Ray Birmingham responded with his own move, giving Russell a pinch-hit opportunity to win the game and send the 751 Lobo fans in attendance home happy.

Russell came through in the clutch with an infield knock to deep second base that gave UNM the win. It was an exciting moment, as the entire UNM squad rushed the field to celebrate with Russell and Schneider.

The game lasted nearly four hours, with the two teams combining for 26 hits and 15 runs.

Tune in tomorrow starting at 11:40 for our live coverage of game two and three of the series, live from Santa Ana Star Field. You can listen live on the air, online at www.1017theteam.com, and on the TEAM app available in the Apple App Store and Google Play.