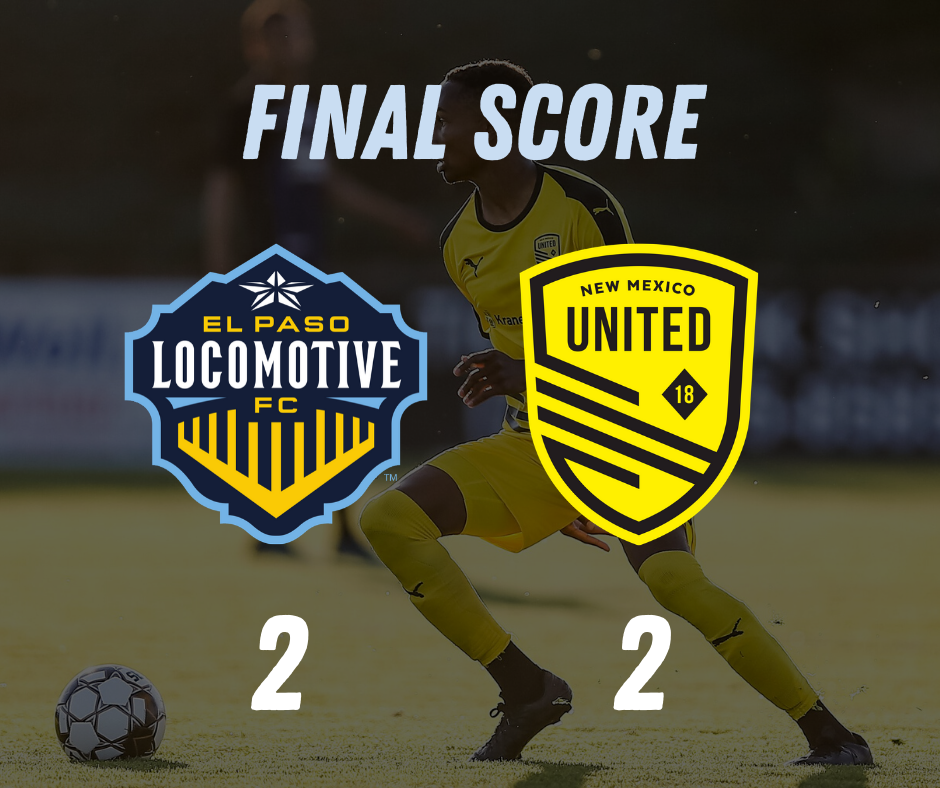 All things considered, this was probably the most likely outcome.

After another grueling 90 minutes, New Mexico United (1-1-1) and El Paso Locomotive FC (1-0-2) ended in a 2-2 draw. The two sides generally play each other very close, and this one was in the balance until the very end.

United came out of the gates firing on all cylinders. From the opening whistle, New Mexico brought out an old tactic, employing a high press that El Paso didn’t seem to expect. Within minutes, it was clear that United was poised to jump out to an early lead.

The extended period of pressure forced El Paso into making some bad passes, one of which was sent back to keeper Logan Ketterer. The ball would come off of Ketterer’s foot and fall to an opportunistic Chris Wehan.
Wehan’s tap-in put United ahead 1-0 and was his second goal of the season.

United would maintain control for much of the first half, keeping pressure on Ketterer and forcing him into action multiple times. Just before the half was over, though, United seemed to just switch off defensively once again. They would allow not one, but two goals in the final six minutes of play. The first came from the boot of Omar Salgado, who was able to finish from close range and pull the hosts back level. Minutes later, El Paso would find a go-ahead goal.

While there was some doubt whether or not Salgado was offside on the first goal, the second was even more controversial. After Bryam Rebellón attempted a bicycle kick, the ball once again fell to Salgado, whose shot was blocked by Cody Mizell. On the rebound, the ball would go directly to Andrew Fox, who appeared to be in an offside position. His tap in was allowed, however, and the hosts would take a 2-1 lead into the half.

The momentum gained on the heels of those two goals would carry over into the second half, where El Paso had near 70% possession for the first fifteen minutes of play. The flat start to the second half for United finally got broken through in the 67th, when Sandoval sliced a shot wide from close range, nearly tying the match once again. The attempts didn’t stop there, and United was finally able to answer in the 76th. A run into the box from Wehan would draw a penalty from Locomotive defender Drew Beckie. Sandoval would go on to bury the attempt and bring the score back level.

Both clubs would have opportunities late to find a winner, but neither would succeed as the match ended in a 2-2 draw.

Player of the Match
Chris Wehan – Two goals in two games, Wehan is showing a killer instinct in the final third, and his penalty gave United the opportunity to pull level.

Up Next
United’s next match will be on Friday, July 24, once again taking on El Paso. That match will also take place at Southwest University Park and is slated for a 7 pm kickoff.