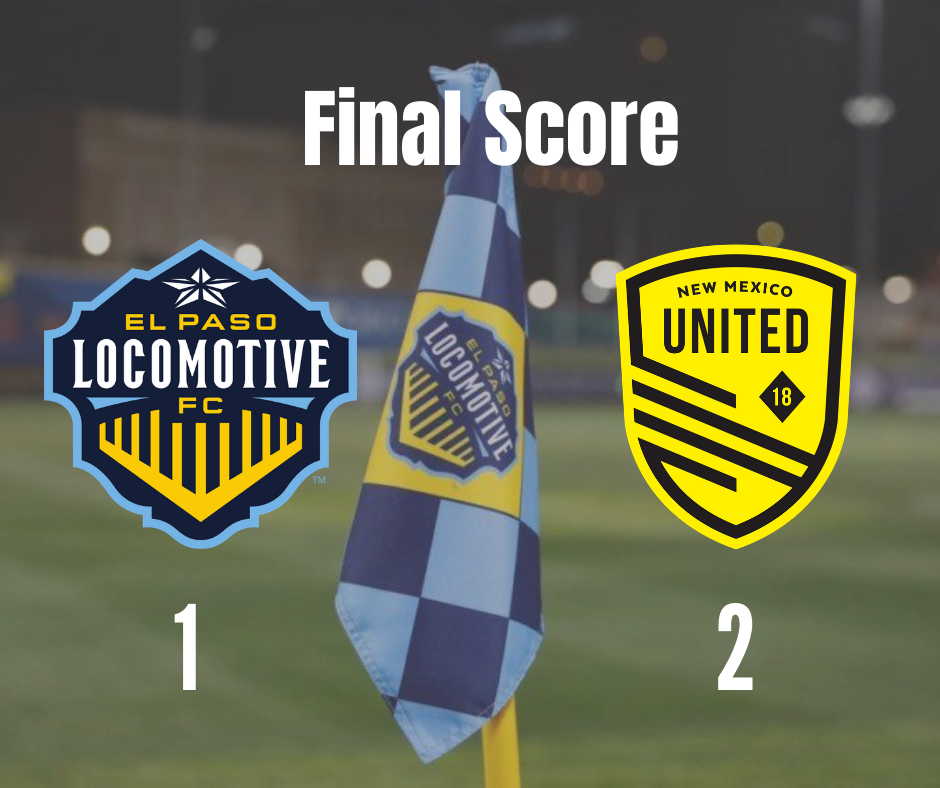 For the third time in three matches since the restart, New Mexico United (2-1-1) slotted home two goals as they were able to withstand a late push from El Paso Locomotive FC (1-1-2) to secure three points and move to the top of Group C. It was also the second time in nine days that both Chris Wehan and Devon Sandoval were able to put the ball past Logan Ketterer.

In the first match, United was able to get an early goal due to the high press, but tonight United struggled to get off the mark. They weren’t nearly as successful with the press early on as El Paso, who likes to play out of the back kept finding Omar Salgado on the left wing. Several times during the first fifteen minutes, Salgado was able to get the better of Austin Yearwood and found enough open space to try and get the ball into the box. Fortunately for United, none of the attacks from the Locomotive forward paid off as they slowly came to life.

The more United was able to play their way into the match, the more effective the press became. El Paso’s passes weren’t as sharp and they weren’t able to play out of the back as efficiently. Even with the improved level of play, it wouldn’t be until after the first hydration break that the scoreless match would be broken open.

After Chiro N’toko went over the back of Sandoval in the 34th, United was awarded a free kick from around 30 yards away from goal. Standing over the ball to take the kick was returning New Mexico United captain Josh Suggs, who was seeing his first action of the year. Suggs would curl a left-footed pass to the penalty spot where Sandoval was able to head the ball out to the right side of the box to a waiting Wehan. Taking the shot with the inside of his right foot, Wehan would power the ball past Ketterer and into the top netting, giving United a 1-0 lead.

New Mexico wasn’t done imposing their will on El Paso in the first half and would push the lead to two goals deep into extra time before the half. The press would pay dividends once again as Wehan would steal near midfield and play it back forward towards Amando Moreno. A quick pass from Moreno to Sandoval would give him just enough space to send a low shot back across goal and into the bottom left corner, just out of the reach of Ketterer once more.

Carrying a 2-0 lead into the second half, United knew that they needed to continue to keep the pressure on El Paso. Their head coach Mark Lowry had other ideas, however. Making a change at halftime, Lowry would send on Dylan Mares and the impact was almost instant. Minutes after coming onto the pitch, Mares put a header just off target, eliciting a dive from Cody Mizell. With the introduction Mares, Salgado moved to the right side of the pitch in an attempt to get him more involved after the half.

El Paso would come close to pulling a goal back in the 63rd after Richie Ryan would lash in a shot from 20 yards, forcing a save from Mizell. United would go on to maintain the clean sheet until the 85th. Kalen Ryden would attempt a sliding tackle on Aaron Gomez after he entered the penalty area. Despite very little contact after Gomez attempted a shot, El Paso was awarded a dubious penalty. Gomez would be the one to take the attempt from the spot, going to his left as Mizell guess the wrong direction, pulling one back for Locomotive FC.

Into stoppage time, United would also be awarded a penalty. Daniel Bruce would draw a foul as he attempted to cut back towards the middle of the box and was tripped up by N’Toko. With a chance to put the match back out of reach, Wehan would step up to the spot and would go to his left. Unfortunately for Wehan, Ketterer would guess the correct direction and save the attempt.

New Mexico would go on to see out the final few minutes of the match and come away with four points from two matches in El Paso and sitting on top of the Group.

Devon Sandoval – Sandoval has stepped up his game and is making the most of his time on the pitch. He now has two goals and an assist in the past two matches for United and has been instrumental in United’s undefeated run since the restart.

After the postponement of the Real Monarchs SLC match, United are next in action on Saturday, August 1st when they take on OKC Energy FC at Taft Park. That match is set for a 6 PM (Mountain) kickoff.