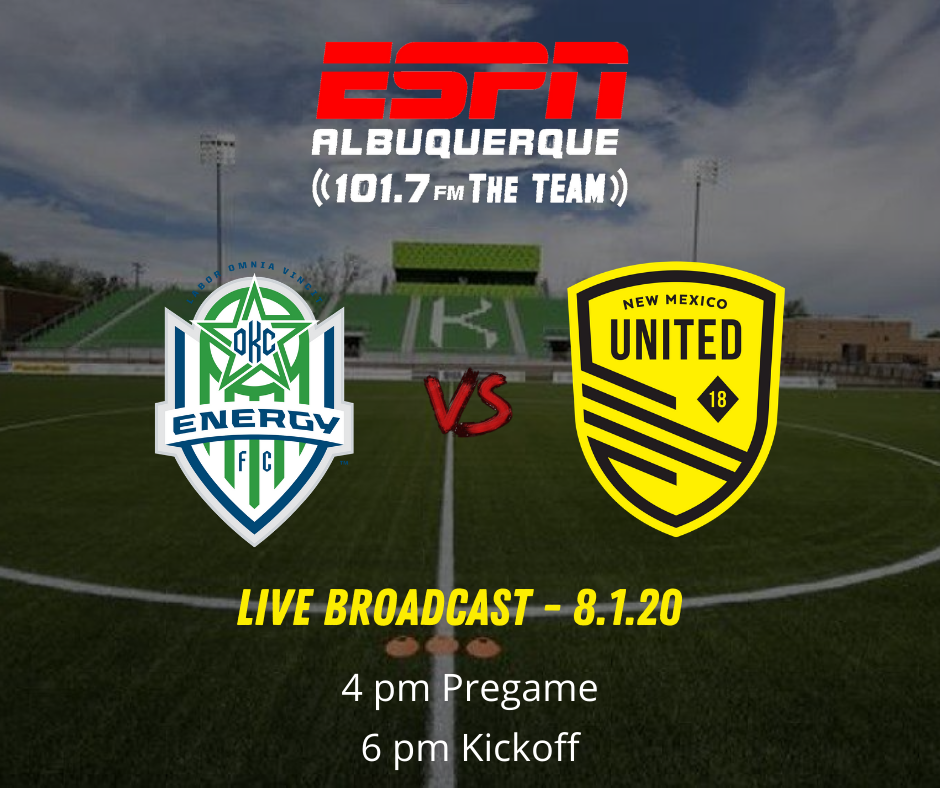 The out of group matches for New Mexico United (2-1-1) gets underway this weekend with the club once again on the road. This time they pay a visit to Taft Stadium, home to OKC Energy FC (1-1-2). It’s been nearly a year since the two clubs faced each other, the last time also at Taft with United coming out on top 3-1.

That match came at a poor time for OKC, it ended up being the second in an eight-match winless streak that saw them slide out of playoff contention. Their poor run at the end of the season would push OKC all the way down into 15th after a very promising start. Much of their success during the 2019 campaign was due to the play of Deshorn Brown. With Brown no longer part of the club, OKC has found themselves needing to turn to other players. So far this season, newcomer and USL veteran Jamie Chavez is leading the club with two goals in four appearances.

Chavez came to OKC by way of the now-defunct Fresno FC, where he notched 12 goals in 29 appearances for the club. Behind his goals, OKC finds themselves currently sitting second in Group D, only two points behind San Antonio FC. They come into this weekend’s match having drawn two of their last three. For most clubs two draws would be a decent run of results, however, these came against the bottom two clubs within their group.

Those sorts of results aren’t necessarily promising when facing a club like New Mexico. With limited offensive options, it could be difficult for OKC to break down the United defense.

Frank Lopez – The Cuban forward has found his way to from San Antonio to OKC and is looking to make his mark with another club. Last season Lopez was able to score against United during their trip to San Antonio, en route to a 5-0 victory. Lopez is creative and can score from distance and could play a large role Saturday night.

For United, they are truly becoming road warriors. After showing they were capable of withstanding extended time away from The Lab last year, they could become one of the most feared squads in the USL. Given the format of this season, it’s becoming a very real possibility that United could play every match on the road. No matter where the matches take place though, the goal remains the same; win.

Three matches into the restart, United remains undefeated since returning to play. The schedule doesn’t get any easier the deeper it goes. With OKC looking like a potential playoff contender, the out of group schedule may not be as easy as originally thought. So far though, United has risen to every challenge this season has given them. Chris Wehan and Devon Sandoval have combined for five goals in the month of July and are looking to carry that momentum into August.

New Mexico has also been performing well in the defensive third despite a number of injuries. In a shortened season, United may eventually run into the issue of tired legs, but with a number of different players able to fit into multiple roles, it may not be as much of an issue for the club this season. If the club is able to get fully healthy, they present an enormous challenge for any opponent.

Romeo Parkes – As the season rolls on, Romeo continues to impress with his level of play. His confidence has grown in his time with United and it’s only a matter of time before he finds the back of the net. His contributions will be needed throughout the season as the club continues to look for more goals to match last year’s productivity.

Saturday night’s match is set for a 6 p.m. (Mountain) kickoff from Taft Stadium. The match will be broadcast live on ESPN+ and can be heard locally on ESPN Radio 101.7 The TEAM, via The TEAM app and on www.1017theteam.com.