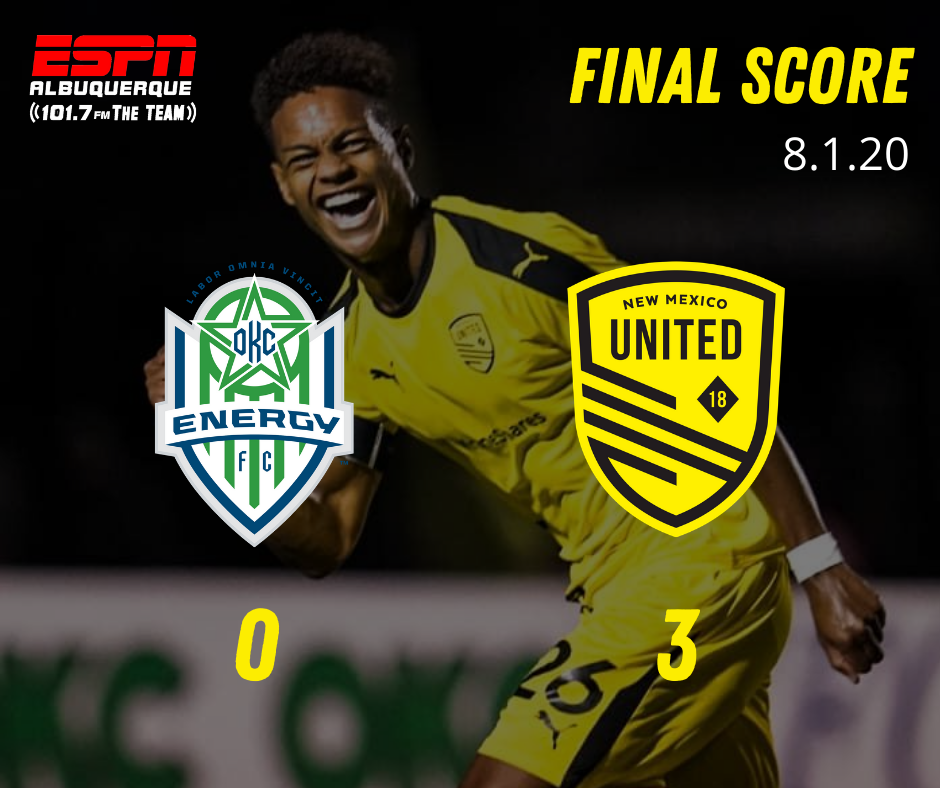 Call them Road Warriors, call them the Kings of Chaos. Whatever you want to call New Mexico United (3-1-1), one thing is clear; they came to play after the restart. In what was easily their most complete performance of the season, the boys in yellow shut out OKC Energy FC (1-2-2) by a final of 3-0.

Without Devon Sandoval in the team sheet, some were wondering whether or not United would be able to break down a very solid Energy FC defense. Head Coach Troy Lesesne had a few tricks up his sleeve that caused issues for their hosts all night long. With an announced starting eleven that featured Romeo Parkes as the lone striker, it gave United a different feel. The 6’4″ forward did a very good job employing the press and forced the Energy FC defenders into some bad passes throughout the match. In another change of direction, Josh Suggs played as more of a left midfielder or left-winger, often making gashing runs deep into the final third.

Having just played two matches against El Paso, United knew what to expect from Energy FC. The two clubs both employ a very possession heavy gameplan, preferring to build out of the back. The downside for both clubs is that neither would handle the high press from United very well. Throughout the match, United would force heavy touches from Energy FC and ended up registering 16 interceptions.

For the first half-hour of the match, neither side could do enough to break down the other and create more than a few weak opportunities on goal. Just as the clock was passing the 30-minute mark, Kalen Ryden would play a long ball towards Daniel Bruce sending United on a break. A few touches later, United had worked the ball into the right side of the box where Chris Wehan made a run behind the Energy FC defenders. Wehan sent a cross back across the face of the goal where Amando Moreno was able to find the back of the net with a diving header.

With the shadows creeping over the pitch towards the end of the half, it looked as though neither side would put the ball between the posts before the whistle blew. United was content to press and disrupt the Energy FC plan, while at the same time the hosts couldn’t find a way to test Cody Mizell.

In the third minute of added time, due in large part to the now common hydration breaks, Wehan had other plans though. A steal by Andrew Tinari allowed Parkes to make a run to the right corner of the box. A series of step-overs was enough to hold up play long enough for Bruce to make a run towards goal, just like the earlier one from Wehan. This time it was Wehan on the receiving end of the cross and buried it with a right-footed shot putting United up by two just before the break.

Although United surrendered 56% possession in the first half, they only allowed one shot by Energy FC, which was easily handled by Mizell. The performance was by far, one of the best halves in club history for United.

It’s commonly said that the most dangerous lead in football is 2-0, and United has at times in the past either come out of the locker room sluggish or switched off before the whistle. Early in the second half, it looked as though United may surrender a goal. A penalty conceded by Ryden in the 49th didn’t help that feeling. Jaime Chavez would take the attempt from the spot for Energy FC, and despite leading Mizell the wrong direction Chavez would push his shot wide of the net.

Despite being down by two, Energy FC came out of the break doing a much better job of maintaining possession and were able to force Mizell into action in the second half. United stood firm though and was able to fend off each attack from OKC. With the lead and time winding down, Lesesne would start bringing on his subs, including Rashid Tetteh for his first minutes of the year. It wouldn’t take long for Tetteh to make his presence felt, becoming immediately involved and showing off his physicality by disrupting Energy FC possession multiple times.

In the third minute of injury time, United would put the match away for good. Joris Ahlinvi would draw a foul just outside of the box setting up United in a very dangerous position. Taking the shot himself, he delivered the ball straight into the wall but was able to collect the rebound. He would take another shot and this time found enough space to get it through the wall and into the net, his first professional goal, to seal the result.

Chris Wehan – It’s hard to go against the man who was netted four goals and two assists in the past four matches. Wehan’s versatility and playmaking ability continue to impress and keeps putting United in a position to win week in and week out.

With the win tonight and other results from around the group, United now have a five-point lead within Group C. They will look to continue their undefeated run on Saturday, August 8 when the club travels to Scottsdale to take on Santi Moar and Phoenix Rising FC. The two clubs have met three times previously, two of which ended in draws. The third of those matches saw United advance in the U.S. Open Cup after going to penalty kicks.