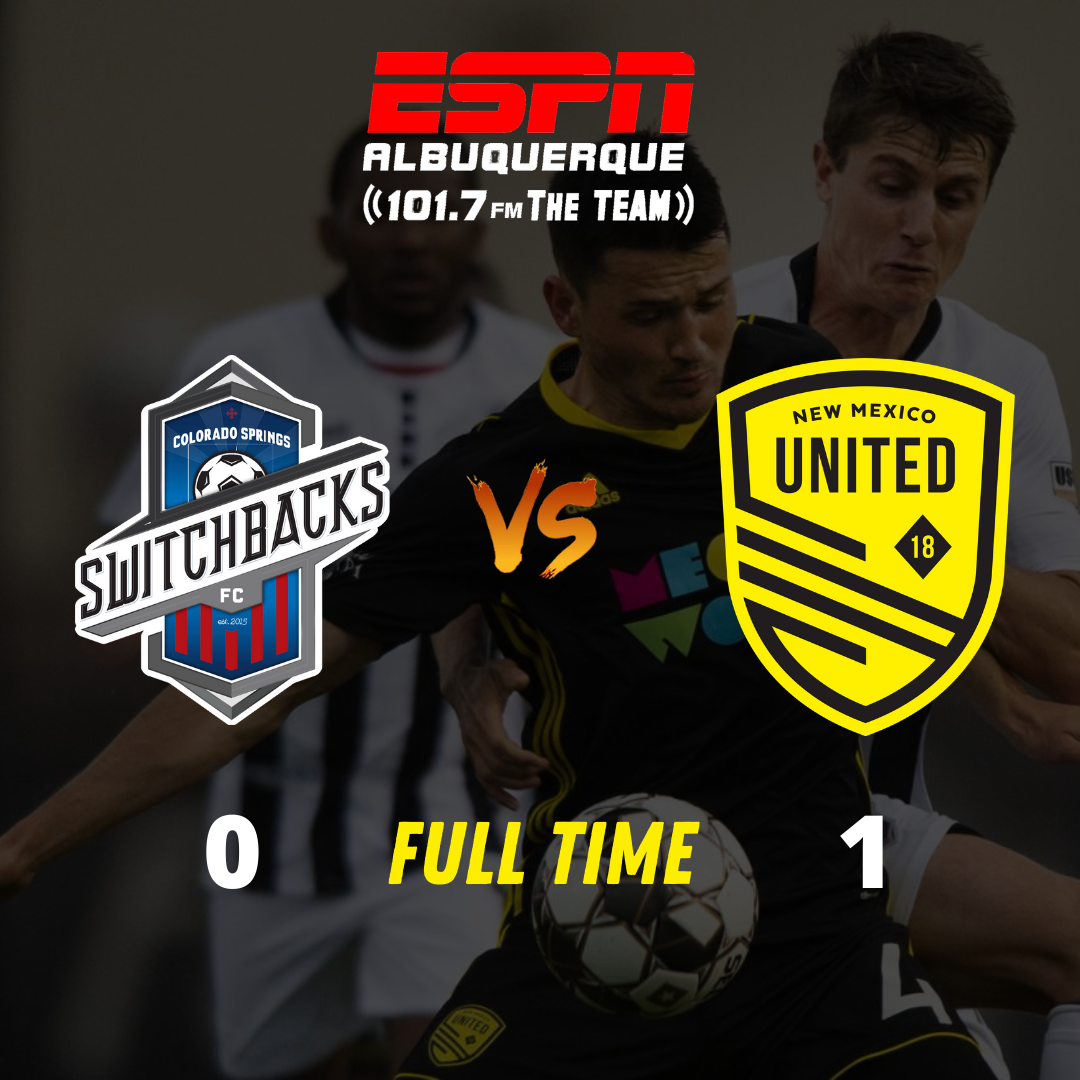 Wearing their home black kits for only the second time this season, New Mexico United (4-2-1) needed to prove that the result from the match against Phoenix Rising FC was just an anomaly. If not for two goals called back, tonight would have been a statement win for the club.

They nearly opened the scoring minutes into the match. As United was working the high press they were able to get possession deep into the Switchbacks (1-4-1) side of the pitch and captain Josh Suggs tried to pounce on a ball inside the six yard box. Colorado Springs was lucky to not go down a goal early as keeper Abraham Rodriguez was quick on his feet and was able to make the save.

The hosts would come close to breaking the scoreless match in the 18th as a cross from Jordan Burt traveled across the box, but was headed wide by Christian Volesky. Neither side would trouble would go on to trouble the opposing keeper as the match ran closer to the half-hour mark.

Just before the first hydration break, United midfielder Andrew Tinari would be given a yellow card for a foul 20 yards away from goal. Aidan Daniels would step up to take the free kick, but the result was a shot placed directly to United keeper Cody Mizell. In the minutes that followed Devon Sandoval would again come close, but ultimately put the ball just over the bar.

In a match that looked like it would reach the end of the half as a scoreless draw, United was visited by Lady Luck. In the 45th, Chris Wehan would claim his 5th goal of the season. As Wehan streaked towards the penalty spot, Amando Moreno delivered a cross from the right wing to where only Wehan could get to it. Wehan’s shot would go off of Rodriguez and have enough on it to still find it’s way into the net for a 1-0 lead. Even after a strong first half performance, United was only able to manage three shots and held 53% of the possession.

Coming out of the break, United came out fast and inside of five minutes would have two opportunities they weren’t able to take full advantage of. In the latter of the two, the high press once again made an impact on one of United’s matches. Daniel Bruce was able to stick out his foot and break up a Switchbacks pass in their own third. His follow up run was cut short by what appeared to be a foul, but was not whistled by the referee.

Moments later, the match was sent into a weather delay in the 53rd minute. After an hour break, the match was resumed and it didn’t take long for the Switchbacks to look dangerous. In the 57th, the hosts’ attack was stopped by a brilliant job defending from Kalen Ryden. Running shoulder to shoulder with Austin Dewing, Ryden was able to display his physicality and put an end to the threat.

United looked to double their lead in the 69th after a cross by Daniel Bruce. The cross from Bruce went to the far post where Amando Moreno slotted home, but was ruled offside. Less than minutes later, United once again put the ball into the net, this time it was Sandoval who hit a perfectly placed bicycle kick to the far side of the net. Unfortunately for United, this one was also ruled offside.

Colorado Springs would come close in the 84th to pulling level, but a great save by Mizell kept the clean sheet in tact for the time being. Minutes later, Wehan nearly found a second on the day. With Sandoval and Wehan both streaking into the final third, Sandoval played the ball forward to the midfielder. Now one on one with Rodriguez, Wehan let loose with a powerful shot, but Rodriguez was able to make himself big as he went to ground and was able to prevent United from pulling further ahead.

The Switchbacks were able to earn a late free kick from 22 yards, but the attempt was well wide of the target and they weren’t able to get another good attempt on goal afterwards. United’s solid defensive performance earned the club another three points on the road and maintained their undefeated record against Colorado Springs.

Kalen Ryden – With another strong performance, this time notching three clearances and two interceptions, Ryden was integral in keeping the clean sheet in tact. He was able to showcase his physicality late in the match and effectively ended a number of Switchbacks attacks.

With the win United extended their lead to a current five points over second place El Paso. Locomotive FC plays later tonight against Real Salt Lake, United’s opponent for the next two matches. The first of those two matches will take place on Wednesday, August 19, with kickoff scheduled for 8 p.m. (mountain) from Zion’s Bank Stadium.