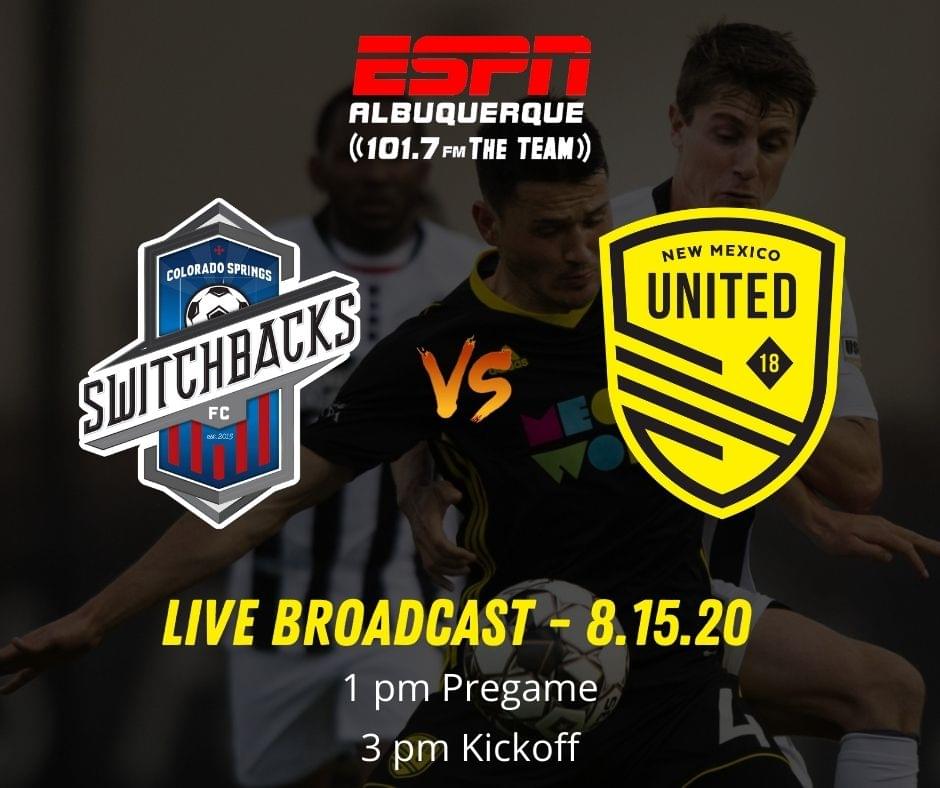 One week ago, NewMexicoUnietgdfound themselves on the wrong end of a result for the first time since the restart. In that match, United surrendered an early lead and was unable to come from behind on the road. While the result came as a shock to some, it was bound to be a tough match since Rising FC is arguably one of the favorites to come out fo the Western Conference once again.

Despite the loss, United still holds the top spot in Group C. It can use Saturday’s match against Colorado Springs Switchbacks FC as an opportunity to put some added distance between them and the bottom of the table. Historically, playing against the Switchbacks means good things for United.

Four matches into the series and United has won all of them. The last time out a wonder-strike from Saalih Muhammad and a follow up goal from Chris Wehan was all that United needed to secure the win.

In terms of match order, that match followed United’s first loss of the season. Even with the three-month gap in between, it’s fair to say that United responded well after the loss. The question for United now is whether or not they will bounce back after the Phoenix match. How they play on Saturday could dictate their momentum for the next month.

Except for Justin Schmidt, Head Coach Troy Lesesne will have his full roster available for selection. So far, United’s versatility has plate a crucial role in their success, but with the full complement of players, this will match will likely see the best possible team sheet for the club. Given the improved play from Colorado Springs this season, that will be a significant benefit for Lesesne.

Playing against the Switchbacks has always been beneficial for United in the final third, having scored two or more goals in every appearance. Now that most of United’s attack has opened their account for the season, the number of threats has only increased for the boys in yellow. The creativity and deadly accuracy of Wehan will prove to be one of the keys for United on Saturday.

Andrew Tinari – The first-year midfielder has been an asset for the club through their first six matches. Tinari is among the top in the club in touches and has become one of the keys to unlocking the forwards.

Things didn’t go much better for the Switchbacks in their previous match. They fell behind in the early and were never able to put any real pressure on El Paso Locomotive FC. The loss was their third in four matches and saw Colorado Springs drop to the bottom of Group C.

Uvaldo Luna was a bright spot for the club in the loss, picking up two goals within the final eight minutes of the match. With those two goals, Luna is now the scoring leader for Colorado Springs.

The Switchbacks will be hoping that a return to Weidner Field will give them an advantage. In the first of six consecutive matches at home, including two against United, they’re hoping to put themselves back into playoff contention. With only ten matches remaining, they need to find some answers against the top two clubs within the group. On Saturday, it will come down to whether or not the Switchbacks can stop United in the midfield. If they can prevent United from pressing and creating plays from the midfield, they have a chance to pick up three points.

George Lebese – A talented midfielder, he has been putting pressure on opposing defenses every week. Although he only has one goal to show for his efforts so far this year, he’s someone that United will have to keep in check.

Saturday’s match is scheduled for a 3 p.m. kickoff from Weidner Field. The match will be broadcast live on ESPN Radio 101.7 The TEAM, via The TEAM app and website, and can be viewed on ESPN+. The match will also be televised locally on KOAT-7.