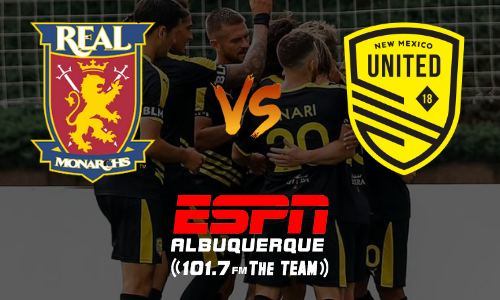 Over the course of this week, New Mexico United (4-2-1) has a chance to put the defending champions in a spot that no one would have expected. While Real Monarchs SLC (1-3-1) does have two matches in hand, they’ve been heading the opposite direction as United. With a poor showing this week, there’s a genuine possibility that the Monarchs won’t even return to the playoffs.

As strong as the end of the 2019 campaign was for the Monarchs, the 2020 season has been just as bad. They’ve been held goal-less in three of the five matches they’ve played and have only scored four goals in total. Without much production in the final third, it’s going to be hard to three points week in and week out. It probably shouldn’t have come as much of a surprise given the amount of turnover their roster faced, especially upfront. Gone from the ’19 roster are Maikel Chang, Douglas Martinez, and, of course, Kalen Ryden.

Even with the losses, Real isn’t without attacking options. Both Jack Blake and Ricardo Avila returned for another season. Blake is a proven goal scorer and did manage to score against United in the Albuquerque match last season. Real also has University of Washington alum Kyle Coffee as a potential weapon in the final third.

Real will have to be at the top of their game to break down a United defense that has greatly improved over last year. With two clean sheets to their credit this season, United stand a very good chance of holding the Monarchs scoreless as well.

Kyle Coffee – The UW alum had a fantastical collegiate career, notching 15 goals in 74 appearances. He made a splash last year with six goals in his first professional season and is looking to do more of the same in his sophomore campaign.

United come into the match week as one of the hottest clubs in the USL. With only one loss since the restart, the club has charged to the top of the standings in Group C. Led this season by the performances of Devon Sandoval and Chris Wehan, there has been no lack of firepower for United.

The more impressive performances though, are coming from guys like newcomer Kalen Ryden. Facing against his former club for the first time, Kalen should be familiar with what they want to do. Ryden’s stat line this season has been impressive, 28 clearances, seven blocks, 16 interceptions. That sort of production will help sure up any defensive unit. Solid defensive play has led to Cody Mizell facing fewer shots than many of the other keepers around the league, and in turn produced better results.

With two matches within four days’ time, United will likely see some rotation within the team sheet to try and keep the legs fresh for both. The depth that United has this season will provide a much-needed boost for the club and be the key to picking up results.

Cody Mizell – United’s number 1 has been solid all year long. After seven matches, Mizell is facing just over three shots per match while conceding just over one goal per 90 minutes. Mizell’s leadership and play on the pitch have helped to elevate the club.

Wednesday’s match is set for an 8 p.m. (Mountain) kickoff from Zion’s Bank Stadium. The match will be broadcast on ESPN+. The match will also be heard locally on ESPN Radio 101.7 The TEAM, via The TEAM app, or website. Spanish language commentary is also available on La Zeta 106.3 FM.