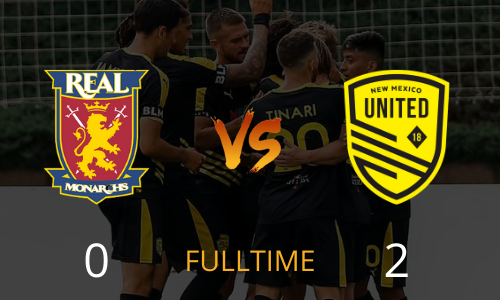 If there was any trepidation about facing off against the defending champions, New Mexico United didn’t show it. With many of their starters being rotated out due to short rest between matches, the different look came out firing. The opening minutes saw Joris Ahlinvi and David Najem would come within inches of putting United on top early.

Starting the match in a more traditional 3-4-3, United was able to control early possession while being able to apply pressure up top with Romeo Parkes. Joined up tonight on the night by Ahlinvi and David Estrada, the men in yellow looked dangerous. After the two quick attempts, Real Monarchs SLC composed themselves, and using some pressure of their own were able to slow the United attack and find some possession for themselves.

United would come close to opening the scoring once again in the 17th off of a corner. Ahlinvi delivered the ball into the box where Estrada attempted a header towards the near post, but the ball went into the outside netting. Najem would then find himself one on one with Monarchs keeper Jimmy Slayton in the 25th. With a near post attempt of his own, Najem’s shot was blocked by Slayton and cleared out of danger.

Real struggled with maintaining possession for the first half-hour, losing the ball multiple times in the midfield to the aggressive play of United. They weren’t without moments of potential danger, however. Three separate times, the Monarchs would play crosses into the box, in particular from the wings, but the balls couldn’t quite find their intended targets.

Coming out of the hydration break, Monarchs winger Julian Vazquez would find himself in space from around 20 yards, and put in a left-footed shot. The low, skimming shot was on target but was no real threat to Cody Mizell. United would respond with a gashing run from Parkes down the middle of the pitch. With only Slayton to beat, Parkes would take a left-footed shot but would sky it over the bar.

More so this year than last, United has appeared dangerous from corner kick opportunities. In the 38th, the work on those scenarios would pay off. As play resumed with the corner, Estrada loaded up and sent a cross from the right wing flying beyond the far post. Waiting at the end of that cross was former Monarch Kalen Ryden. Ryden’s powerful header was no match for Slayton, and United found themselves with the first goal of the match.

Just before the half time whistle, the Monarchs would get another chance to try and find their first goal of the night. Once again playing from the wing, Andrew Brody delivered a cross into the box where Vazquez was waiting. Vazquez would attempt the header from near the penalty spot, but just couldn’t get enough downward force on it to find the net and instead sent it over.

As has been the case in the past, United came out of the break a little sloppy. They struggle to hold possession and gave Real opportunities to deep into their final third. Heading into the 56th, the Monarchs had multiple chances to get the ball into the box, but they weren’t able to find enough quality touches to earn a leveler. In an effort to try and regain some control in the match, Troy Lesesne would send on Andrew Tinari and Amando Moreno.

Immediately after they came onto the pitch, United would gain possession in the Real half, and Parkes would sit at the top of the box with the ball at his feet. Two quick ball rolls caused Monarchs players to run past, but they were two touches two many. Unable to fully control the ball after the moves, he would squib a shot towards goal, but didn’t threaten Slayton at all. Through the first 15 minutes of the half, the hosts were able to extend their possession to nearly 60%.

Against the run of play, United would double their lead in the 68th. After a foul was called on the Monarch’s Sierakowski in United’s half, New Mexico would play the ball quickly to Estrada, who chipped the ball ahead to Moreno. With what looked like a heavy touch, Moreno was able to draw Slayton off his line. With the keeper now out of position, Moreno would chip the ball over him and into the back of the net.

Undeterred, Real would continue to force the issue and moment later drew a foul just outside for United’s box. The veteran Jack Blake would be called upon to take it and his aim was true. If not for the tremendous diving effort from Mizell, the ball would have found the back of the net. Real would control the rebound, and seconds later, Sam Brown would force a leaping save out of the United keeper to maintain the clean sheet.

Parkes would get himself into another one on one situation with Slayton in the 75th, but once again, it came to nothing. Running into the box, a heavy touch would put the ball too close to the keeper and he was able to block the attempt from Parkes.

With time winding down, the Monarchs started putting more bodies forward in an attempt to try and get a late goal. At the same time, United dropped deeper into a more defensive style of play and was able to keep the defending champions at bay.

Kalen Ryden – Once again, Ryden put on a spectacular display, this time against his former club. Contributing at both ends of the pitch, he was able to guide the defensive effort in a match where United was happy to give up possession and defend a lead.

With another win in the books and another clean sheet, United have now won four of their last five and currently hold a 5 point lead in Group C again. The other three clubs still have matches in hand over United, but with the lead that the club is building, it is getting late in the season, and it could be hard to overcome. United will be back in action on Saturday night, once again taking on Real Monarchs SLC.

Saturday’s match is scheduled for 8 p.m. (mountain) from Zions Bank Stadium. That match will be available on ESPN+, ESPN Radio 101.7 The TEAM, The TEAM app, and 1017theteam.com.