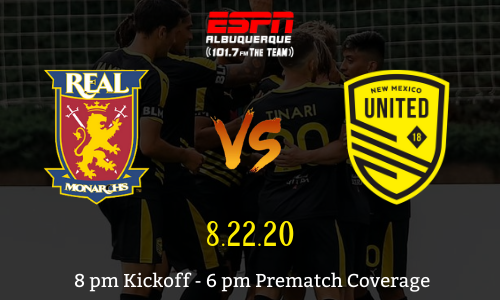 This week New Mexico United (5-2-1) has a chance to do something they’ve never done in the club’s short history. That feat would be winning three matches in a row. While it may seem like a small thing, in the type of season that the club is facing, momentum could mean everything.

After rolling out an unfamiliar team sheet on Wednesday night against Real Monarchs SLC (1-4-1), Troy Lesesne’s club proved once again how important depth is in the USL. Without club leaders Devon Sandoval and Chris Wehan leading the way, the onus was on the rest of the club to pick up where they left off in Colorado. The club answered the call and took a win from the first meeting with the defending champions this season.

Now, they have a chance to put a major dent in their chances of repeating, or even getting a shot at the playoffs. That will come down to what happens Saturday night in Herriman. With Sandoval and Wehan essentially getting a night off during the first match, the two should be well-rested for the weekend. In the first match, United was willing to sit behind the ball and allow Real to garner the majority of possession. With both of United’s attackers expected to return, that may change on Saturday.

While the entire squad has been coached up to employ the high press, none do it better than Sandoval and Wehan. Wehan, in particular, puts himself into positions to be able to take advantage of any miscue from his opponents. Real didn’t allow that to happen on Wednesday, but the differences in play may be too much for them to handle.

It was also evident on Wednesday night just how poor Real’s finishing has been this season. One of the worst scoring clubs in all of the USL, the hosts generated very few clear chances for themselves. Often relying on crosses or shooting from outside the box, they weren’t able to put much pressure onto Cody Mizell and the United back line. Far too often, their crosses didn’t find their intended targets, and their attacks sputtered before they could be truly dangerous. In order for Real to have a chance at defending Zion’s Bank Stadium on Saturday night, they’ll have to show a lot more creativity and better decision making in the final third.

Austin Yearwood – Coming off of a Team of the Week award, Austin had another solid performance slowing down the attack of the Real Monarchs. Under Lesesne’s tutelage, Yearwood has shown tremendous growth and is someone that is a large part of United’s game plan.

Jack Blake – One of the centerpieces of this season’s Monarchs club, Blake has an opportunity to not only mentor the younger players around him but also put himself in the spotlight. After scoring 11 goals a year ago, he’s been largely quiet in the final third, but that could change at any moment.

Saturday night’s match is set for an 8 p.m. (mountain) kickoff from Zion’s Bank Stadium. The match can be viewed live on ESPN+. The match can also be heard locally on ESPN Radio 101.7 The TEAM, via The TEAM App, and website. Spanish language commentary will be available on La Zeta 106.3 FM.